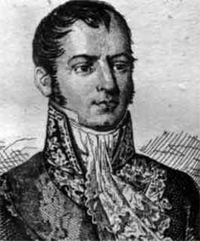 Savary is best known for his work as an aide-de-camp to Napoleon, and later serving as the Minister of Police. Originally admitted to the royal college of Saint Louis at Metz as a pupil of the king in 1783, he left in 1789 and the next year volunteered in a cavalry regiment where his father served as a major. Promoted to sous-lieutenant in 1791, he joined the Army of the Rhine where he would serve for the next five years. With the Army of the Rhine, in 1793 Savary served under Custine, was promoted to lieutenant, and then became an aide-de-camp to General Férino. Later he served at Berstheim, was promoted to captain, served at Friedberg, and took part in the crossing of the Rhine at Kehl under Vandamme in 1797 before being promoted to chef d'escadrons.

In October of 1797, Savary became aide-de-camp to Desaix, a position that would come to greatly affect his future. In 1798, he followed Desaix to Egypt to serve in that capacity. Promoted to chef de brigade in early 1800, he returned to France in May with Desaix and joined Desaix in crossing the Alps to join the Army of the Reserve. After Desaix was killed leading the counterattack at Marengo, Savary went back and found Desaix's body so he could be properly buried. When First Consul Bonaparte learned of this, he made Savary his aide-de-camp.

In 1801, Savary was placed in charge of a legion of elite gendarmerie tasked with guarding the First Consul. In 1803 he was promoted to général de brigade, and then later he was sent on secret missions to Brest, the Vendée, and Normany to surprise the accomplices of Cadoudal, who were plotting assassination attempts against Napoleon. Appointed as the Governor of Vincennes, when the Duke of Enghien was seized and brought there for trial, Savary upheld the verdict of the trial and ordered the Duke's execution.

Promoted to général de division in early 1805, Savary joined La Grande Armée as aide-de-camp to the Emperor. In November, after the two Russian armies had successfully united, Napoleon sent Savary to Tsar Alexander to attempt to negotiate an armistice. Knowing that the Tsar would be emboldened by the successful concentration of the Allied armies, Savary's principal task was to convince the Tsar that Napoleon was worried and lacking confidence. He successfully did this, helping lay the groundwork for the Battle of Austerlitz.

After fighting at Jena the next year, Savary was given command of a brigade of light cavalry to take part in the pursuit of the fleeing Prussians. He fought at Nossentin, won at Wismar, and seized Rostock before relinquishing his command to direct the siege of Hamelin, which he successfully took within a few weeks. After Marshal Lannes fell ill and was unable to command the V Corps, Savary took command of the corps and was victorious over the Russian General Essen at Ostrolenka. He was rewarded for his service with a Grand Cross of the Legion of Honor, and replaced by Marshal Masséna a month later in command of the corps.

Once Napoleon finally removed Fouché from the post of Minister of Police, Savary received the position and held it until Napoleon's abdication. In 1812 he was briefly disgraced as the Malet conspirators surprised him in bed and held him prisoner for a few hours before the conspiracy was stopped. During the first restoration, he lived in retirement, and upon Napoleon's return he became the inspector general of gendarmerie.

After the Hundred Days, Savary was proscribed and decided to follow the Emperor into exile. After accompanying Napoleon for part of his journey to exile, the British then decided Savary could not accompany Napoleon to St. Helena, and arrested him on board the Bellerophon. Sent to prison on Malta, Savary was condemned to die back in France, but managed to escape from the island and take refuge in Smyrna. Next he traveled to London seeking political help in 1819, and then returned to Paris, where he was imprisoned. Standing trial, he was acquitted and released.