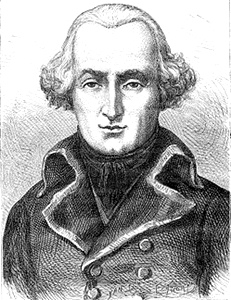 The son of an officer serving in the Austrian army, Pierre-Marie-Bartholomé Férino first served at a young age with his father during the Seven Years War. In 1767 at age nineteen he was a commissioned a sous-lieutenant in the Austrian army and seven years later in 1774 he was promoted to lieutenant. Feeling mistreated by the Austrians, in 1786 Férino resigned from their army and then went to France to join the army there. After the onset of the Revolution, in 1792 he was named a lieutenant colonel of chasseurs.

In 1793 Férino served under General Custine and that May he fought at the combat of Hexheim. Two months later in July he was promoted to général de brigade by the representatives of the people near the Army of the Rhine. Less than a month later Férino was again promoted, this time to général de division, and he was given command of the advance guard of the Army of the Rhine. However, that October he was arrested for having disciplined his men too severely, though only two weeks later he was restored to his command. Férino finished out 1793 by taking part in the recovery of the lines of Wissembourg and helping to lift the siege of Landau. In 1794 he was suspended in June but had his suspension lifted in September.

In April of 1795 General Férino was employed in the Army of the Rhine and Moselle and that October he took command of a division. He commanded a variety of the divisions within the army until April of 1796 when he took command of the right wing of the Army of the Rhine and Moselle. In June of 1796 Férino and his men crossed the Rhine at Kehl and then seized Offenbourg, and then in July they fought at Biberach and pushed the enemy back at the valley of Kintzig. Continuing on the campaign, Férino and his men seized Lindau and Brégentz in August and then the next day he won a battle at Oberkamlach. Later that month he served at Friedberg and then in October he served at Schliengen. Férino next took part in the defense of Huningue where he made a brilliant sortie on the night of January 27, 1797, successfully destroying some Austrian siegeworks and nailing some cannons. Nevertheless, the city was forced to surrender and afterwards Férino was placed in charge of the 2nd military division.

Férino remained in charge of the 2nd military division until that September when he refused to take part in the coup of 18 fructidor. After the success of the coup drove the royalists out of power, Férino was removed from command as a suspected royalist. Nevertheless, only a year later in 1798 he was allowed to rejoin the army and he was assigned to the Army of Mainz. During his time with the Army of Mainz Férino briefly served as interim commander and also commanded a division. In March of 1799 he was placed with the Army of the Danube and he served at Stockach, but then in April he was replaced and then assigned to the Army of Switzerland. However, Férino fell ill and and he did not join the army for a few months. Eventually he took command of two divisions of the army.

In March of 1800 Férino was ordered to command the efforts to stop brigands in the départements of Drôme, Vaucluse, Basses-Alpes, and Ardèche. In 1801 he took command of the 3rd military division at Metz and then in 1804 he was honored as a Grand Officer of the Legion of Honor. Férino was appointed a senator representing Florence and also named the governor of Antwerp in 1807. The following year he was named a Count of the Empire and then in 1813 he organized the National Guard in Holland. Férino returned to France in November of 1813 and he supported the abdication of Napoleon in 1814. Afterwards, he obtained French citizenship and he was named a Peer of France by the restored Bourbons. He did not take part in the Hundred Days of 1815.