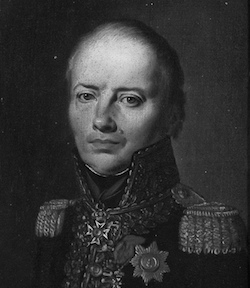 Commander of the Army of the Rhine in 1794

The son of a clerk, Claude Ignace François Michaud enlisted in the chasseurs of Gevaudan in December of 1780. He was dismissed in 1782 and seven years later in 1789 he took command of the National Guard of La Chaux-Neuve and Châtelblanc. In October of 1791 Michaud was elected capitaine in the 2nd Battalion of Volunteers of Doubs and three months later he became lieutenant colonel of his battalion. For the next three years he served with the Army of the Rhine, and in October of 1792 he was named commander of Delémont. In May of 1793 Michaud help bring Porrentruy into France and the representatives of the people with the Army of the Rhine promoted him to général de brigade. That September he seized the forest of Bienwald and took part in the attack of the camp of Nothweiler and he was then promoted to général de division. The next month Michaud defended Geisberg during the loss of the lines of Wissembourg and then at the end of November he took command of the right wing of the Army of the Rhine.

In 1802 Michaud become inspector general of infantry and in 1805 he was sent to Holland to serve as commander-in-chief of the army there. He remained in Holland until November of 1806 when he took command of a division of Marshal Mortier's VIII Corps and he was named governor of the Hanseatic Cities. In March of 1807 Michaud took command of the 1st Division of Marshal Lefebvre's X Corps and he therefore participated in the Siege of Danzig . Afterwards, he served as inspector general of depots at Danzig for a period of time and briefly served as interim commander of Berlin. In January of 1808 Michaud was named governor of Magdeburg and he remained in this position for the next five years. In 1808 he was also named a baron.

In April of 1813 Michaud was replaced as governor of Magdeburg by General Haxo and Michaud was named inspector general of infantry of the 13th, 14th, and 15th military divisions. After Napoleon's abdication and the Bourbon Restoration in 1814, Michaud was named a Knight of Saint Louis and a Grand Officer of the Legion of Honor but he was also forcibly retired.