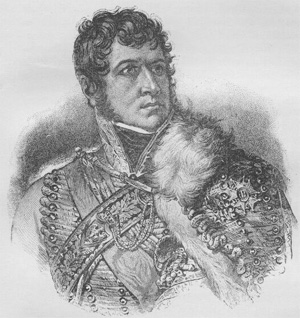 The son of a judge, Jean Andoche Junot was working as a clerk when in 1791 he volunteered and joined the 2nd Battalion of Volunteers of Côte d'Or. The next year he saw battle, being wounded by a saber blow to the head and receiving a promotion to sergeant. Serving with the Army of the Rhine in 1793, Junot was wounded by a shot in May before being sent to the Siege of Toulon later that year. At Toulon Junot's clerical skills were being put to good use when he was noticed by the young artillery officer Napoleon Bonaparte. As Junot was writing down orders, shots landed around them, kicking up dirt that rained down onto them. Despite the danger, Junot did not seem to notice and remarked that thanks to the dirt he now had no need of sand to dry the ink.1 Captain Bonaparte was so impressed that he made Junot an aide-de-camp and got him a commission as a sous-lieutenant.

In 1794 Junot was promoted to lieutenant and he joined the Army of Italy. In early 1795 he was promoted to capitaine in the 1st Hussars but later that year he returned to Paris to resume being an aide-de-camp to Bonaparte, now a general. Late that year Junot received a promotion to chef d'escadrons in the 3rd Dragoons, but in 1796 when Napoleon took command of the Army of Italy Junot went with him and was named premier aide-de-camp. Serving during the campaign, in May he was given the honor of taking captured flags to the Directory and he was promoted to chef de brigade. Next Junot escorted Madame Bonaparte to Milan. That August at the combat of Denzanzano Junot killed six enemy soldiers in combat but also took six saber blows in doing so and was dangerously wounded. Out of action for a while, he did not fight again until the next year at Faenza.

When Napoleon left for the expedition to Egypt, Junot accompanied him and took part in the fighting on Malta. Once in Egypt he served at Rahmanieh, Chebreiss, and the Battle of the Pyramids , and then he helped repress the revolt of Cairo. In January of 1799 Junot was promoted to général de brigade and in March he was attached to Kléber's division. On April 8th, his men fought off the sizable Turkish forces at Nazareth, and then on the 11th he fought at the bridge of Yacoub and the combat of Ghazarah. On the 16th, he and his men contributed to the victory of Mount Tabor . A few months later in July Junot joined Rampon's division and served at the Battle of Abukir. He did not accompany Napoleon's return to France, instead departing Alexandria in October and being captured by the British on his way back.

Finally released, General Junot set foot back in France on June 14th, 1800 in Marseille. On October 30th, he married Laure Adélaïde Constance Permon who would go on to write sensationalist memoirs after his death. Both he and his wife were eager to participate in high society, gaining quite a reputation for spending money and amassing large debts. Promoted to général de division in 1801, Junot was placed in charge of Paris until late 1803, when he took command of the grenadiers in reserve at Arras. The next year he served at the camp of Boulogne and in 1805 he received a Grand Eagle of the Legion of Honor. When Lannes returned from Portugal, Junot was sent in his place as ambassador to Portugal, but he returned to the Grande Armée in September to take part in the 1805 campaign as an aide-de-camp to Napoleon. After serving at Austerlitz, he was made Governor General of Parma and Piacenza and he took charge of repressing the revolt of the Apennines. Later that year he was named a Commander of the Iron Crown and then he became Governor of Paris.

During this time he was known to have an affair with Napoleon's sister Caroline and he began showing signs of erratic behavior which some suspected resulted from the head wounds he had received earlier in his career. One time in Paris, Junot became infuriated for losing while gambling, and so he tore apart the room and caused a sensational scene. After that incident, Napoleon was so annoyed that he asked Junot if he had taken an oath to live and die as a fool.2 At other times Junot was seen to threaten his creditors with his sword.

Regardless of his behavior, he continued to receive commands, being made commander-in-chief of the Corps of Observation of the Gironde during the summer of 1807 and then leading them into Spain in October. When the French invaded Portugal, Junot was named commander-in-chief of the army, and then in February of 1808, Governor General of Portugal. During this time Napoleon further rewarded Junot by giving him the title of Duke of Abrantès. In August Junot's army fought against a British-Portuguese army under Sir Arthur Wellesley, the future Duke of Wellington, at Vimeiro and the French were defeated. Junot was forced to surrender at the end of the month. However, General Kellermann was able to negotiate the return of the French troops to France at the Convention of Cintra and the French received such good terms that the British later held an inquiry.

In October of 1808 Junot returned to active command, being given command of a corps of the army in Spain before being directed to take charge of the Siege of Saragossa. At Saragossa Junot's behavior became increasingly unstable. When he learned that Marshal Lannes was to replace him as the commanding officer, he planned a suicidal assault in an attempt to win glory and credit for himself before Lannes could arrive. Fortunately, General Lacoste firmly convinced Junot that a rash assault would fail and that Junot would be personally at fault.3

In 1809 Junot initially commanded the III Corps in Spain for a few months before traveling to Nuremberg to command part of the Army of the Reserve in Germany. He was beaten by Kienmayer on July 9th at Gefrees but that was the extent of his combat for that campaign. Around this time he received another reward, the Grand Cross of the Order of Saint Henry of Saxony. Sent back to Spain with VIII Corps at the end of the year, Junot besieged Astorga before finally taking the city in April of 1810. His corps became part of Marshal Masséna's Army of Portugal, and they covered the siege of Ciudad-Rodrigo, and later he commanded the center at the Battle of Bussaco . After that defeat, Junot was victorious at Sobral, and then in January of 1811 he was victorious at Rio Mayor but was wounded by a ball to the nose. In May he served during the retreat to Pombal and he fought at Fuentes de Oñoro .

Returning to France in June of 1811, Junot was inactive until placed as second in command to Prince Eugene de Beauharnais in April of 1812. As the preparation for war with Russia got underway, their unit became the IV Corps of the Grande Armée. When Jérôme Bonaparte abandoned the campaign, Junot was placed in charge of Jerome's VIII Corps of Westphalians. They took part in the attack on Smolensk but let the Russians escape the trap and missed the Battle of Valutina. Napoleon was disappointed by his performance and said Junot "gave me great cause of dissatisfaction. He was no longer the same man and committed some gross blunders which cost us dear."4

Junot returned to France in January of 1813 and became increasingly unhinged. Napoleon sent him to become Governor of Venice and Governor General of the Illyrian provinces, but his behavior was so unstable that he was relieved of command and escorted by his father back to his father's estates at Montbard. Legend has it that Junot gave a ball and then still in uniform, leapt from a window to his death. His widow continued her high lifestyle and she went on to publish questionable memoirs full of gossip under her title of the Duchess of Abrantès.