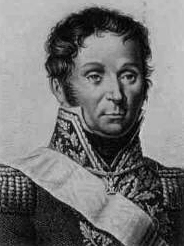 Son of Marshal Kellermann and a notable cavalry general

François-Etienne Kellermann, the son of Marshal Kellermann, was a talented cavalry general. After beginning his military service as a sous-lieutenant of hussars in 1785, he later went on to accompany the French ambassador to the United States in 1791. In May of 1793 Kellermann returned to a France in turmoil and became an aide-de-camp to his father. In this position, he served with the Army of the Alps and took part in the siege of Lyon until he was suspended from duty and shortly thereafter arrested alongside his father. After defending their actions, they were released in 1794 and Kellermann volunteered to join the 1st Hussars of the Army of the Alps.

In 1795 Kellermann became an aide-de-camp to his father again, and then in early 1796 he was promoted to chef de brigade and transferred to the Army of Italy. Along with many others of the Army of Italy, Kellermann distinguished himself despite the hardships faced by the army. After serving at Lodi , he took part in the siege of Milan and then went on to help with putting down the revolt in Pavia. Next he took part in the Siege of Mantua under Masséna, and then he fought at Bassano , Arcola , and Rivoli .

During of the crossing of the Talgiamento in March of 1797, Kellermann was wounded by several saber blows. As a reward for his contributions, General Bonaparte gave him the honor of taking the captured enemy flags to the Directory. Two months later he received a promotion to général de brigade. The next year began with Kellermann taking command of a brigade of dragoons in the Army of England, and then being transferred to the Army of Rome. Named commander of the advance guard of Macdonald's division, Kellermann was victorious at Nepi. In early 1799 he was employed in the Army of Naples under Championnet and took part in the attack on Naples. Later that year, he fell ill and took leave, traveling to Aix-en-Provence to recover.

After Napoleon's return and coup d'état, Kellermann took command of a brigade of cavalry in the Army of the Reserve. At the Battle of Marengo, after General Desaix launched his fatal counterattack, Kellermann waited for the perfect moment to strike and then on his own initiative led his men in a charge against the Austrian lines, sealing the victory. A month later he received a promotion to général de division in recognition of his services. As time passed, Kellermann grew resentful over his part in the battle, feeling that he deserved more recognition for making a decisive contribution to the victory. Napoleon however was grateful, and years later as reports came in about Kellermann's rampant looting, Napoleon would let Kellermann's behavior slide, remarking that with Kellermann he thought only of Marengo.1

In May of 1811, Kellermann finally returned to France. After taking command of the 3rd Division of Light Cavalry, he was scheduled to become part of Grouchy's III Cavalry Corps, but he fell ill and was replaced by General Chastel. Perhaps this was a blessing in disguise, for he missed the Russian campaign and the disastrous retreat. In the meantime he took an administrative position of the 5th military division, but his health never fully recovered. In March of 1813 Kellermann retired due to his health, but only a month later he was reinstated and returned to active duty, taking command of the cavalry of Ney's III Corps. Despite being retired only two months earlier, that May he fought at Rippach, Lutzen, Koenigswartha, then was wounded by a shot to the chest at Klix, and finally fought at the Battle of Bautzen. Next Kellermann took command of the Polish IV Cavalry Corps and he led them into action at Dresden and Leipzig .

During the defense of France of 1814, General Kellermann took command of the VI Cavalry Corps. He fought at Mormant, Bar-sur-Aube, Barse, and Saint-Dizier. After Napoleon's abdication, the Bourbons rewarded him by making him a Commander of the Iron Crown and giving him a Grand Cordon of the Legion of Honor.

With Napoleon's return from exile in 1815, Kellermann returned to the Emperor's service despite his father joining the Bourbons. Taking command of the III Cavalry Corps of the Army of Belgium, he charged at Quatres-Bras with his men and almost won the day for the French. A few days later, at Waterloo he took part in the grand charge and was wounded. Afterwards, he returned to Paris and put his considerable negotiation skills to work by negotiating alongside Gèrard and Haxo in Davout's name with the king.