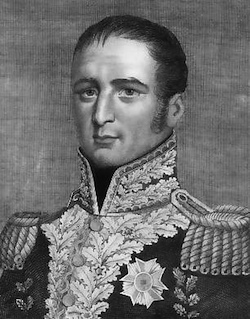 The son of a royal bailiff, Maurice Étienne Gérard would rise to become a notable general and eventually a Marshal of France. Gérard first joined the military in October of 1791 when he volunteered to join the 2nd Battalion of Meuse. Less than a month later he saw his first action, fighting at the defiles of Argonne and then at Jemappes . The next month Gérard received a promotion to sous-lieutenant, and then in 1793 he fought at Neerwinden and was promoted to lieutenant.

The summer of 1794 was a busy time for Gérard after he joined the 71st demi-brigade commanded by Bernadotte, whom he would work closely with for many years. As part of the Army of the North, that June they crossed the Sambre, fought at Fleurus and Charleroi and then at Fleurus again. Next they joined the Army of the Sambre and Meuse, and then in 1795 Gérard joined Bernadotte's staff and fought at Kreuznach. In 1796 Gérard took part in the occupation of Wurzburg and the combat of Teining before following Bernadotte to Italy at the end of 1796. The next spring he fought at Gradisca where General Bonaparte promoted him to capitaine on the field of battle. In 1798 Gérard stayed attached to Bernadotte and followed him on trips to Paris and Vienna where he continued to distinguish himself.

In February of 1799 Gérard's position with Bernadotte was confirmed when he officially became an aide-de-camp to Bernadotte. That year he took part in the blockade of Philippsbourg, distinguished himself at the defense of Zurich, and was promoted to chef d'escadrons in the 9th Hussars while still maintaining his status as an aide to Bernadotte.

Gérard's next major career event came in 1803 when he was put on non-activity for a time, but regardless he continued to serve as Bernadotte's aide and in 1804 he followed Bernadotte to Hanover. When war broke out in 1805, Gérard was designated the primary aide-de-camp to Bernadotte and took part in the campaign that year, fighting at Austerlitz where he was wounded by grapeshot to the thigh.

During the Prussian campaign of 1806, Gérard missed some of the major battles due to being part of Bernadotte's corps, but he still served at Schleiz, Halle, Strelitz, Crivitz, and Lübeck. That November he was promoted to général de brigade, and then in December he was given command of a brigade of Desjardin's division in VII Corps. With this brigade he fought at Mohrungen in January and then at Eylau in February, where his brigade was part of VII Corps which was almost wiped out. A month after Eylau he was given command of the 2nd Brigade of Villatte's division in I Corps, and then in the campaign that June he fought at Spanden.

After the Treaty of Tilsit, Gérard returned to Marshal Bernadotte as his chief of staff. He followed Bernadotte to Copenhagen in 1808 and while there he received the Grand Cross of the Order of Denmark. Later that year he went to Hamburg. When Austria declared war in 1809, Gérard became chief of staff to Bernadotte's IX Saxon Corps. That May he fought at Durfort, and then in July he fought at Enzersdorff and Wagram , where he commanded the Saxon cavalry. In the meantime he had been created a Baron of the Empire, and after IX Corps was dissolved he took a command within II Corps.

General Gérard's involvement with Marshal Bernadotte ended the next year when Bernadotte was selected as the heir to the Swedish throne. Instead of following Bernadotte, Gérard was sent to Spain where he was attached to Drouet d'Erlon's IX Corps and then served in Claparède's and then Conroux's division. In 1811 he fought at Fuentes de Onoro and then in August he was approved to return to France for leave due to ill health.

In 1812 Gérard was given command of a brigade of Gudin's 3rd Division in Davout's I Corps. With the army throughout the campaign, he assumed command of the division after Gudin's unfortunate death at Valutina that August. Gérard went on to fight at Borodino and received a promotion to général de division a few weeks afterwards. During the retreat he fought at Maloyaroslavetz and then in December he defended Kowno with Ney. He continued to command the remains of a division up through January as the army fell back to friendly territory.

The spring of 1813 saw Gérard commanding the 31st Division of Macdonald's XI Corps. He received the reward of the Grand Cross of the Order of the Reunion, and then in May he fought at Lützen before taking command of the 35th Division to fight at Bautzen. A few days later he was wounded as the army approached Lauban. That August Gérard took command of XI Corps and led them into battle at Goldberg but was then wounded a few days later at Katzbach when he was hit in the thigh by a ball. Nevertheless, Gérard was fit enough to lead his men into battle at Leipzig that October, but he was badly wounded in the head there. Due to his wounds, he quit the army and returned to Paris.

That December Gérard prepared Phalsbourg for defending itself and then he briefly took command of the reserve of Paris. In January of 1814 he took command of a division in II Corps, and with them fought at Brienne. The next month he fought at La Rothière and repulsed the Austrians approaching Troyes. He went on to fight at Valjouan and Montereau where Napoleon relieved Marshal Victor of command and put Gérard in charge of the corps. Gérard continued to fight and distinguish himself up until Napoleon's abdication.

The restored Bourbons immediately put Gérard to work, sending him to Hamburg to take over his old colleague Davout's surrender of the city to the Allies. He completed this task and was rewarded as a Knight of Saint Louis and Grand Cross of the Legion of Honor. Bernadotte, now the Crown Prince of Sweden, took the opportunity to also reward Gérard with Sweden's decorations, decorating him as a Commander Grand Cross of the Order of the Epée of Sweden and also the Order of Seraphins of Sweden.

When Napoleon returned from Elba for the Hundred Days, he placed Gérard in charge of IV Corps and made him a Peer of France. At the time, Gérard recommended General Bourmont to Napoleon, and when Napoleon questioned Bourmont's loyalty, Gérard guaranteed Bourmont's loyalty with his own head. This was enough to convince the Emperor, but unfortunately, Bourmont then defected to the Allies. Upon learning of this, Napoleon confronted Gérard, tapped him on the cheek, and remarked, "This head's mine, isn't it? But I need you too much!"1

As commander of IV Corps, Gérard joined the Army of the North and took part in the Battle of Ligny. Afterwards, he was placed under Marshal Grouchy's command with the goal of preventing the Prussians from uniting with the English. Two days later, as they heard the sounds of the Battle of Waterloo in the distance, Gérard argued with Marshal Grouchy to convince him to march to Waterloo, but Grouchy would have none of it. Instead, Gérard followed orders and took part in the Battle of Wavre, where he was wounded by a ball that hit him in the chest. After the loss at Waterloo, Marshal Davout ordered Gérard, Haxo, and Kellermann to negotiate with the king on the terms of surrender of the Army of the Loire.

Gérard was forced into exile by the once again restored Bourbons, and he left France to retire in Belgium. Despite his exile, in 1816 Gérard married the daughter of General Valence. He returned to France in 1817 and later led successful political and military careers, eventually becoming a Marshal of France in 1830.