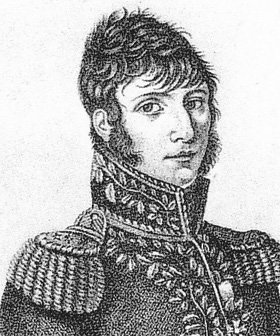 Michel-Marie Claparède began his military career by joining the 4th Battalion of Volunteers of Hérault in February of 1793. Within a few days his battalion elected him a capitaine, and the next month they traveled to the Army of the Coasts. That November he was elected lieutenant colonel, but early the next year he renounced his rank as lieutenant colonel to return as a captain to his battalion. Claparède stayed on the coasts until late 1798 when he was ordered to lead a detachment of recruits from Hérault to the Army of Italy. Once in Italy he took command at Milan before joining the staff of the Army of Italy. A promotion to chef de bataillon followed, and then Claparède followed Moreau to Paris and then the Army of Rhine.

With the staff of the Army of the Rhine, Claparède was in charge of secret information, and took part in the battles of Engen, Messkirch, Biberach, and Hochstaedt. After returning to Paris during the short time of peace, he returned to the front and assisted during the Battle of Hohenlinden.

The next year, Claparède was placed under Leclerc in the staff of the army that would be sent to Saint-Domingue. In January of 1802 he embarked at Cadix on L'Intrépide, and arrived in Saint-Domingue in February. That summer he was placed in charge of the city of Cap and promoted to général de brigade. In October, he was a member of the war council that judged Haitian general Belair, and then in December he served in Clauzel's division. The next summer Claparède was authorized to return to France for health reasons, and he arrived back in France in January of 1804.

Willing to return to the Caribbean, General Claparède was next assigned to serve under Lagrange on the expedition to Dominica. Leaving the isle of Aix in January of 1805, he arrived at Dominica in February and took part in the action of Roseau. The next month he seized Basse-Terre on Saint-Christophe before heading back to France.

Once back in France, Claparède joined the army at the camp of Boulogne, and eventually ended up in Suchet's division, commanding the advance guard. During the campaign of 1805, he led his troops into action at Wertigen, Ulm, and Hollabrunn before holding the line at Santon during the Battle of Austerlitz. The next year Claparède was further distinguished, leading his unit at Saalfeld, Winzerlé, Jena, and Prentzlow before being wounded in the foot by a ball at Pultusk . In February of 1807 he fought at Ostolenka, and then in June was driven out of Borki by the Russians, but shortly later returned the favor by driving out the Russians and seizing the bridge of Drenzewo.

In 1808, Claparède was made a Count of the Empire, commanded the infantry during the Congress of Erfurt, and was promoted to général de division. Sent to Spain, in January of 1809 he temporarily governed Valladolid before returning to France to organize a division at Strasbourg. In April he led this division to join the army in Germany, and this division became the 1st Division in II Corps. During the Danube campaign, Claparède served at Pfaffenhofen, Landshut, and Passau, then was wounded in the little finger by a ball at Ebersberg. Fighting at Aspern-Essling , he was again wounded, this time by a ball to the left arm and a shot to the thigh. Next Claparède was sent to command the 1st Division of the Army of Dalmatia, which he took charge of just in time for the Battle of Wagram . The next week he was wounded at Znaim, and then put in charge of the 1st Division of XI Corps. During the autumn of 1809 Claparède commanded the 1st military arrondissement of Illyria before obtaining a leave and returning to France.

In the summer of 1810, Claparède was sent to Spain, taking command of a division of IX Corps at Bayonne in August. In October he was placed in charge of the troops stationed at Salamanca, Zamora, Ciudad Rodrigo, and Almeida. That December he defeated Portuguese General Silveyra at the bridge of Albado, and in the coming weeks he was again victorious at Guittero and the bridge of Freisins. In February of 1811 he defeated English General Trent at Covilhao, and then two months later defeated Erskine at Juncia. Claparède was named commander of the 2nd Division of V Corps in the Army of Spain, replacing Gazan, but he did not take part in the Battle of Fuentes de Onoro . That September he was authorized to return to France, and he finally quit his command in November.

Back in France, Claparède was made commander-in-chief of all Polish troops in the service of France. After organizing a division, his division was attached to the Imperial Guard and served throughout the Russian campaign. In July his division temporarily passed under Davout's orders, serving at Mohilew and Smolensk before returning to the Imperial Guard. At Borodino Claparède's division was kept in reserve, but during the retreat they saw plenty of action at Winkowo, Krasnoe, and the Berezina. Claparède was wounded by a ball to the knee during the fighting at Berezina, and afterwards quit his command to return to France to heal.

He returned to command in June of 1813, taking the 43rd Infantry Division to join XIV Corps under Gouvion St. Cyr. In August he was again wounded, this time in the left arm at Giesshubel, and had to leave his command to recover. Returning to his division in October, he fought at Racknitz before defending Dresden, eventually being taking prisoner when Dresden finally surrendered.

Released the next year, he returned to France and was fairly well treated, being given a Grand Cordon of the Legion of Honor. During the Hundred Days General Claparède stayed in the background, taking no active role. After Marshal Ney was arrested, Claparède was one of the generals who served on the council of war to judge Ney that ultimately declared itself incompetent to try Ney.