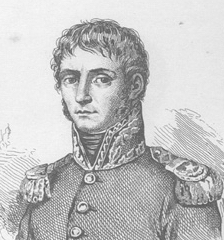 Brother-in-law to Napoleon, Friant, and Davout and commander of the expedition to Saint-Domingue

Like many of the young soldiers of France during the Revolution, Victor-Emmanuel Leclerc began his military career by joining a volunteer unit, in his case the 2nd Battalion of Seine-et-Oise. That same day in October of 1791, his peers elected him a lieutenant in their battalion. Over a year later he was serving in the 12th Cavalry, and then in February of 1793 he was transferred to the Army of Italy. Assigned to the army directed to retake Toulon , Leclerc fulfilled the functions of a chief of staff to La Poype's division. It was here that he met the young Captain Bonaparte, whose sister he was to marry four years later. After the victory at Toulon, he received a promotion to chef de bataillon.

Promoted to général de brigade in May of 1797, Leclerc then found time to marry Pauline Bonaparte. His next appointment was as chief of staff to the Army of Italy under Kilmaine in November, and then he joined the Army of Rome in February of 1798. Later that year, he was designated for the Army of Ireland, but when that expedition failed to materialize he was sent to Lyon to recruit reinforcements from the prison. During this year, one of his his sisters married General Friant. After receiving a promotion to général de division in August of 1799, Leclerc assisted his brother-in-law Napoleon Bonaparte in his coup d'état.

The next year, after a brief stint with the Army of the West under Brune, Leclerc joined the Army of the Rhine, first commanding the 7th Division in the right wing under Lecourbe. After being transferred to command the 2nd Division of the Reserve Corps under Moreau, Leclerc was badly hurt in a fall from his horse, forcing him to give up his command to General Bastoul until he was well enough to serve. In June, Leclerc was well enough to resume his command and led his division at Hochstaedt and then later distinguished himself at Landshut.

In March of 1801, Leclerc took command of the auxiliary corps being sent to Spain to assist the Spanish against Portugal. That October, he returned to Paris to be named commander-in-chief of the expedition to reassert control over Saint-Domingue. Shortly before leaving on the expedition, Leclerc attended the wedding of his sister to General Davout.1 Departing from Brest in November, three months later Leclerc arrived at Cap-Haïtien with his wife and son. After fighting the rebels for a few months, he reached an agreement with the island's leader, the famous Toussaint L'Ouverture, but suspected Toussaint L'Ouverture of treachery and ordered him arrested. Falling ill alongside his soldiers in the coming months, Leclerc succumbed to yellow fever in November.