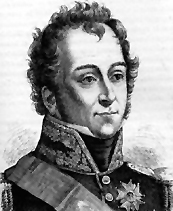 An ensign with the French Guard originally, Louis-Auguste-Victor de Ghaisnes de Bourmont was dismissed from the service near the onset of the Revolution in August of 1789. Two years later he and his father emigrated from France and went to Turin. The following year Bourmont joined the Army of Princes but then in 1793 he joined the cavalry of the Army of Condé serving against Revolutionary France. In 1795 he was authorized to join the Vendéan army and after arriving there he was named a major general of the Army of Scépaux. The Bourbons recognized Bourmont's contributions and named him a Knight of Saint Louis, but when the Vendée was finally pacified he had no choice but to retire to Switzerland.

In 1797 Bourmont returned to France in disguise to meet with General Pichegru, but when the coup of 18 Fructidor exiled the royalists, Bourmont was forced to flee France and he took refuge in London. Two years later in 1799 he was named a maréchal de camp and commander of the Army of Chouans, and leading this force he won at Saumur and seized Mans. However, once Napoleon took power his force didn't stand a chance and Bourmont agreed to stop fighting in exchange for amnesty in February of 1800. Bourmont was allowed to live in freely in Paris, but his freedom was short-lived. In January of 1801 he was arrested, suspected of having taken a part in the assassination attempt on Napoleon's life on Christmas Eve and being an active member of the conspiracy surrounding the kidnapping of Senator Clément de Ris. He was transported to Besançon where he remained in prison for three years before he escaped in 1804.

Taking refuge in Spain and then in Portugal, Bourmont remained there until 1807. When the French army under General Junot arrived in Portugal, Bourmont offered his services to Junot, convincing Junot to add him to the staff. In 1808 Bourmont became chief of staff of Loison's division, but that October when he returned to France he was arrested and detained at Nantes. Through Junot's support, Bourmont was released in early 1809 and then in 1810 he was sent to the Army of Naples.

In 1812 Bourmont was employed in the IV Corps for the campaign against Russia, and that July he transferred to the VIII Corps to serve under Junot. During the retreat that followed, he was wounded by grapeshot in November. Bourmont continued to serve into the campaigns in Germany of 1813, taking a position with XI Corps and fighting at Lutzen where he was wounded again. That September he was officially recognized as a général de brigade. The following year Bourmont took part in the defense of France as part of Victor's corps and he was wounded in the knee while defending Nogent-sur-Seine. Afterwards he was promoted to général de division.

After Napoleon's abdication and the restoration of the Bourbons, Bourmont was treated well. He was serving under Marshal Ney at Besançon when news of Napoleon's escape from Elba reached them in 1815. While Bourmont did not flee, he was suspected of running a spy ring and was not offered a command until Ney, Gérard, and Mouton vouched for him.1 In particular, General Gérard stated that he trusted Bourmont and would answer with his head. Bourmont was given command of an infantry division in Gérard's IV Corps, but the day before the Battle of Ligny he defected to the Prussians with the French plans. Prussian General Blucher had little respect for him and remarked that Bourmont donning the white cockade instead of the tricolor meant nothing to him, a cur remained a cur. Meanwhile, Napoleon tapped Gérard's cheek and jokingly remarked, "This head's mine, isn't it? But I need it too much!"2

After Napoleon's second abdication, Bourmont was again well treated under the Bourbons. At the end of the year he participated as a major witness in the trial of Marshal Ney as the Chamber of Peers attempted to discern when Ney rallied to Napoleon's cause. Bourmont's testimony was suspect and Ney vehemently accused him of lying.3 In the end, Ney was condemned to die and shot, while Bourmont went on to participate in the trial of General Bonnaire in a similar fashion.

In 1830 Bourmont was appointed a Marshal of France, but when Louis-Philippe took power, Bourmont refused to swear allegiance to him. Instead he tried to raise a rebellion in the Vendée and when that was unsuccessful he followed Charles X to exile in England. Meanwhile back in France he was condemned to die in absentia, but in 1840 he was amnestied and allowed to return.