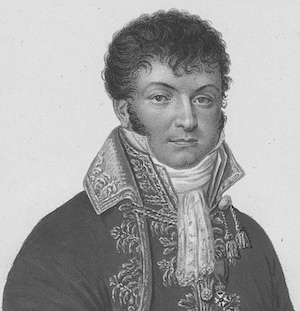 A difficult man known for having only one arm, Louis-Henri Loison first enlisted as a soldier in an auxiliary battalion of colonies in 1787, but Just a few months later he left his post. After the arrival of the Revolution, Loison's father was a deputy to the National Constituent Assembly, and therefore Loison was appointed a sous-lieutenant in the 29th Infantry in 1791. Sent to the Army of the North, he was promoted to lieutenant and then capitaine in 1792. The next year Loison was promoted to chef de brigade by the representatives of the people with the army, and he participated in the destruction of the Abbey of Orval. In 1794 he served in Mayer's division on the Sambre.

Loison's first notable action of 1795 came during the insurrection of 1 Prairial where he rescued representative Doulcet from the mob. A few months later he received a promotion to général de brigade and then in October he served under General Bonaparte on 13 Vendémiaire where Bonaparte fired a "whiff of grapeshot" to disperse the royalists. Afterwards, Loison served a president of the council of war that judged the leaders of the revolt.

In 1796 Loison was assigned to the 17th military division and then designated for the Army of Italy. However, he did not go to Italy and then in 1799 he joined the Army of Switzerland. Serving under Lecourbe, Loison won at Taverne in May, was wounded at Altdorf in June, won at Seelisberg in July, took part in the attack on Saint-Gothard in August, and then continued to fight under Lecourbe against Russian General Suvarov during the events surrounding the Battle of Zurich . General Masséna, commanding the Army of Switzerland, recognized Loison's contributions and promoted him to général de division. Barely more than a week later, Loison took over command of the 2nd Division of the Army of Switzerland and then later in October he retook Saint-Gothard and Reichenau.

In April of 1800 General Loison was designated for the Army of the Reserve and he joined General Duhesme's corps, taking command of the 1st Division. During the crossing of the Saint-Bernard Pass, a platoon of his soldiers refused to continue onward, and Loison ordered his staff to raise muskets and threatened to open fire, convincing the troops they could continue forward.1 After the successful crossing of the pass he took the town of Bard before taking part in the attack on Fort Bard. In June he crossed the Tessin and took San-Giuliano, Melegnano, Lodi, Crema, Orzinovi, Brescia, and Plaisance before he was appointed commander of the reserve. After the conclusion of the campaign, Loison joined the Army of Italy and when hostilities briefly resumed in December he fought at Volta, Pozzolo, and the crossing of the Brenta.

In 1801 Loison returned home to France and then took command of the 25th military division. Two years later he took command of the 2nd Division under General Ney, and then in 1804 Loison was recognized as a Grand Officer of the Legion of Honor. When war broke out in 1805, Loison's division became the 2nd Division of Ney's VI Corps and he led his men throughout the campaign in Austria that year. Loison served at Gunzbourg and Elchingen in October and then at Luetschpass and Scharnitz in November. The following year he was replaced by General Marchand and then later made governor of the province of Munster in Westphalia. In February of 1807 Loison was summoned to Stettin to take command of the Siege of Colberg. That April he arrived at Colberg to take command, and he annoyed the defenders by waving his empty sleeve at them, taunting them to hit his missing arm.2 After the Treaty of Tilsit, the siege was lifted and Loison returned to France.

In late 1807 Loison took command of the 2nd Division under General Junot and with his troops moved across Spain towards Portugal. Serving in the invasion of Portugal, he occupied Almeida that June but then was forced to abandon it for a short time. In July of 1808 Loison won at Guarda and Evora and by now he had gained a reputation for ruthlessness if the population resisted the French at all. That August he fought at Vimiero and afterwards he returned to France following the terms of the Convention of Cintra.

Before long though Loison was back in Spain commanding a division under Marshal Soult, though he came to despise the marshal and his ambitions. He took part in the next invasion of Portugal in 1809, where General Foy was almost killed by the Portuguese until he held up both arms to show that he was not Loison.3 That April Loison took Amaranthe and then in October he took command of the 1st Reserve Division. In early 1810 he took command of the 3rd Division of VI Corps under Marshal Ney, and that summer he served at siege of Ciudad-Rodrigo. Next he seized the Fort of Conception and then served at the Siege of Almeida before fighting at Bussaco in September. After Marshal Ney left in March of 1811, Loison took command of VI Corps and defended Guarda. He fought at Fuentes de Onoro that May and afterwards he was sent back to France when Marshal Marmont took command of the army.

Back in France, Loison commanded various military divisions until he was called to the Grande Armée in May of 1812 for the campaign against Russia. During that campaign, Loison was appointed Governor of Koenigsberg and then in October he was named commander of the 34th Infantry Division. He led his men away from Koenigsberg in November and made his way to Wilna where he rejoined III Corps in December. Loison continued to serve with the rearguard, trying to protect the remnants of the army in retreat.

In early 1813 Loison was named commander of the 25th military division at Wesel. That March he was replaced and arrested for not bringing his division to the front. Loison was reprimanded but released, and in June of that year he briefly took command of the 3rd Division under Marshal Davout.