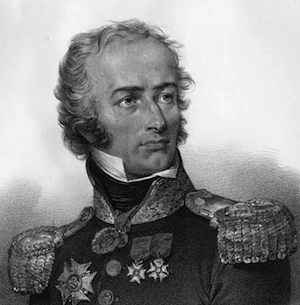 The son of a French soldier and English mother, Maximilien-Sébastien Foy began his military career by enrolling in the artillery school of La Fère in 1790. Two years later he was commissioned as a sous-lieutenant and joined the 3rd Foot Artillery in the Army of the North. In March of 1793 he was promoted to lieutenant and served with the 2nd Horse Artillery, and then a month later he was promoted to capitaine. During this time he became associated with the Girondin party, and in June of 1794 he was thrown in prison for making unpatriotic remarks. After the coup of 9 Thermidor which brought about Robespierre's downfall and the end of the Terror, Foy was released.

In 1795 Foy was reinstated as a captain in the 2nd Horse Artillery in the Army of the Rhine and Moselle. The next year he served at Offenbourg and Kamlach, and then in November defended the head of the bridge of Huningue. 1797 saw Captain Foy wounded in April during the crossing of the Rhine at Diersheim, and two months later being promoted to chef d'escadrons. In 1798 he served in Switzerland under General Schauenburg, and then in 1799 he served with the Army of Switzerland under Oudinot. That year he fought at Feldkirch and Schaffhouse, received a promotion to chef de brigade, and commanded the artillery of Lorge's division at the Battle of Zurich .

Due to his republican views, Foy voted against the Consulate for Life in 1802. In 1803 he was tasked with organizing the defense of the coasts of the 16th military division and then commanding the mobile batteries of the camp of Boulogne. The next year Foy became chief of staff of artillery at the camp of Utrecht and he reasserted his republican views, voting against the establishment of the Empire.

When war broke out in 1805, Foy became chief of staff of artillery of II Corps. The next year he commanded the artillery of the corps in Frioul. In 1807 Foy traveled to Turkey with General Sébastiani where he organized the defense of the Dardanelles and was made a Knight of the Order of the Crescent.

After leaving Turkey, Foy traveled to Portugal to join the French army there. In August of 1808, Foy commanded the artillery reserve at Vimeiro and was wounded there. Three months later he received a promotion to général de brigade and then took command of the 1st Brigade of Heudelet's division in VIII Corps. In January of 1809 his division joined Marshal Soult's II Corps and he served at Corunna . As the campaigns continued, he fought at Villaza, Ruvaens, and Carvalho before being wounded at Braga on March 20th.

A week later, General Foy approached Oporto with the hopes taking the city without a fight. He summoned the archbishop of Oporto to open the gates of the city to the French, but instead he was captured by the Portuguese militia. The militia almost immediately killed him, thinking he was the one-armed General Loison they despised, but Foy held up both his hands to show that he was not Loison. Regardless, he was stripped of his clothes and thrown in the dungeon, but two days later he was freed after the French had taken the city. Continuing to campaign, Foy later fought and won at Arroyo del Puerco and then Cacérès.

In September of 1810, General Foy was made a Baron of the Empire and then fought at Busaco where he was badly wounded. Marshal Masséna chose Foy to return to France to deliver to Napoleon the news of the discovery of the Lines of Torres Vedras. Foy returned to France and met with Napoleon at the end of November, and after presenting his information Napoleon promoted him to général de division.

Foy returned to Portugal, and in May of 1811 assumed command of the 1st Division of VI Corps. The next year he led his division into action at Salamanca, and after the loss of the battle he helped to cover the retreat of the army. In the following weeks he served at Villahoz and Burgos and took Palencia and Simancas.

In May of 1813, Foy seized Castro Urdiales and defended Tolosa. The next month he was wounded at Mondragon and then fell back to France. In July his division became the 1st Division of the Army of the South and he fought at Cubiry and over the next few months he fought at Irun and won at Maya, and then fought at Saint-Pierre d'Irube. In 1814, Foy fought at Orthez where he was wounded by shrapnel to the shoulder blade.

With the return of the Bourbons, Foy was rewarded as a Knight of Saint Louis and Grand Officer of the Legion of Honor. Despite these rewards and his previous republican views, when Napoleon escaped from Elba Foy proclaimed the return of the Empire at Nantes. Napoleon made him a Count of the Empire and gave him command of the 9th Infantry Division. That June he fought at Quatres-Bras and then at Waterloo where he participated in the attack on Hougoumont and was wounded by a ball to the shoulder.

After Napoleon's second abdication, Foy was put on non-activity. In 1819 he entered politics and had a successful career before dying of heart problems in 1825.