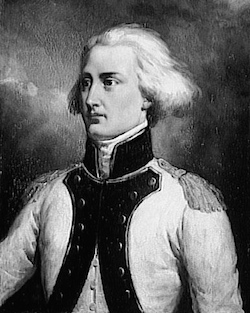 The son of a lawyer in the Parlement of Besançon, Bon-Adrien-Jannot de Moncey was initially set to follow in his father's footsteps to become a lawyer. Instead, at age fifteen he ran away from school and enlisted in the infantry regiment of Champagne. After about four years of service, Moncey purchased a discharge in 1773, only to join the English Gendarmes in 1774. Two years later he was dismissed for misconduct, but in 1779 he managed to join the infantry of Nassau-Siegen as a sous-lieutenant. In 1782 Moncey received a promotion to lieutenant, the highest he would rise before the French Revolution.

With the arrival of the Revolution, Moncey was serving in the 5th Chasseurs when he was promoted to capitaine in 1791. In 1793 Captain Moncey was posted to the Army of the Western Pyrenees, and he first saw combat that June while commanding the advance posts of Château-Pignon. Within a few weeks he was promoted to chef de bataillon and he served at the affair of Aldudes. In February of 1794 Moncey defended the camps of San Culottes near Hendaye, and two weeks after that the representatives of the people with the army promoted him to général de brigade. Another promotion followed in June of 1794, when he was promoted to général de division, having risen from capitaine to général de division in only a year. That month Moncey also commanded the left at Saint-Jean-Pied-de-Port, and the following month he defeated the Marquis of Saint-Simon at Arquizun, seized the camp of Berdaritz, and stormed the entrenchments in the valley of Bastan with the bayonet. Moncey continued to be busy into August, next seizing Haya, Fontarabie, Pasajes, and Saint-Sébastien before distinguishing himself at the siege of Tolosa.

By now the representatives of the people were impressed with his success, and Moncey was appointed commander-in-chief of the Army of the Western Pyrenees shortly thereafter. That October he led his men to victory at Lecumberry and Villanova, and then on the same day his men seized the foundries of Eguy and Orbaciete. The summer of 1795 saw Moncey and the Army of the Western Pyrenees beginning a new offensive when they took Vittoria, crossed the Ebro, and took Bilbao before peace was signed with Spain.

The Army of the Western Pyrenees was disbanded after the peace with Spain, and therefore Moncey was next appointed commander of the Army of the Coasts of Brest. However, he refused the command, citing ill health but more likely wanting to avoid fighting Frenchmen in the Vendée. Moncey was then named commander of the 11th military division at Bayonne, a post he held for the next two years. In September of 1797 certain members of the Directory initiated the coup of 18 Fructidor, exiling royalists and opponents from the government. Moncey was denounced as a friend of Carnot, relieved of command, and forced into retirement.

Moncey was allowed back into the army two years later in September of 1799. Only two months later Napoleon seized power in the coup of 18 Brumaire and Moncey was now appointed a member of the council of general officers and then commander of the 12th and 19th military divisions. In March of 1800 he was sent to the Army of the Rhine to serve under Moreau, and Moreau sent him with 15,000 men to hold Switzerland. That May he and his men were sent to the the Army of the Reserve and crossed the Saint Gothard Pass, afterwards joining the army at Milan and then defending Lombardy. Moncey was next given command of a corps of the Army of Italy and in Cecember he seized Monzembano, crossed the Mincio, and joined up with General Macdonald's Army of Grisons. However the next month General Brune relieved him of command for having been tricked by the Austrians into thinking an armistice had been signed, enabling a number of Austrian troops to escape. Moncey nevertheless remained in his command and actually took Brune's place as commander of the Army of Italy in March. That June he took command of the French troops in the Cisalpine but when he was ordered to support Murat in the Papal States he refused and quit his command.

Moncey returned to active service in December of 1807 due to his previous experience in Spain. Given command of the Corps of Observation of the Coasts of the Ocean, he led them into Spain in January of 1808. As Spain rose in insurrection that May, Moncey led his troops on campaign and won at Las Capreras but then attacked Valencia without success. Nevertheless, Napoleon made Moncey the Duke of Conegliano in July and Moncey went on to win at Almanza. That autumn Moncey took command of the III Corps of the Army of Spain and then won at Lérin before serving under Marshal Lannes at Tudela. Next he was directed to lay siege to Saragossa but before long he was replaced by General Junot.

After Napoleon's abdication, the restored Bourbons retained Moncey as inspector general of the gendarmerie and made him a Peer of France. When Napoleon escaped from exile in 1815 for the Hundred Days, Moncey rallied to him but was not given a command. After Napoleon's second abdication, the Bourbons struck Moncey from the list of Peers and then ordered him to preside over Marshal Ney's court martial. Moncey refused to partake in the trial, stating, "...If I am not allowed to save my country, nor my own life, then at least I will save my honor."1 Despite threats to his career and life, he continued to refuse to serve on the trial, and in response the Bourbons threw him into prison for three months. He was finally reinstated into the army in July of 1816.