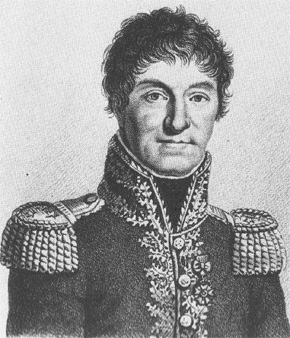 Known as the Organizer of Victory, Lazare-Nicolas-Marguerite Carnot was the son of a lawyer and notary. He studied the classics and philosophy at school at in Autun before going to Paris in 1769 for further studies. Two years later Carnot was admitted to the engineering school at Mézieries, and in 1773 he left the school as a lieutenant.

By the time of the start of the Revolution, Carnot had only risen to the rank of capitaine and was actually in prison for having consulted with General Montalembert without authorization. In May of 1791 he was serving in garrison at Aire and married Sophie Dupont at Saint-Omer, and a few months later he was elected as a deputy of Pas-de-Calais to the Legislative Assembly. After arriving in Paris, Carnot joined the military committee, the committee of public instruction, and the diplomatic committee. The next year he became a Knight of Saint Louis and was sent on a mission to the Army of the Rhine to reorganize it.

Carnot was next re-elected to the National Convention and served on the war committee. During the trial of Louis XVI, he voted for death and against deferment. In March of 1793, as the fledgling Republic was continually threatened, Carnot organized the levée en masse that instituted the first modern draft to defend a nation and oversaw the raising of 300,000 soldiers. In the meantime Carnot personally went on missions throughout the country, and he was selected as a member of the Committee of Public Safety in August of 1793 and placed in charge of military affairs.

Carnot was still only a captain in the French army, but due to his appointment to the Committee of Public Safety, he now wielded a significant amount of power. While he was not officially the Minister of War, he was essentially directing the organization and plans of the French Republic's military. In September of 1793 he traveled to the Army of the North where he helped win the Battle of Wattignies and lift the siege of Maubeuge. Once back in Paris, he frequently disagreed and argued with Robespierre, and so when Robespierre was overthrown and executed during the Thermidorian Reaction in June of 1794, Carnot survived the purge.

In March of 1795 Carnot was promoted to chef de bataillon and he unsuccessfully tried to defend some of the surviving members of the Committee of Public Safety from political attack. Barère, Billaud-Varenne, and Collot d'Herbois were tried and deported despite Carnot's influence, and only two months later Carnot himself was politically attacked, but nothing came of it. That September Carnot was elected a deputy by thirteen different départements, and he finally chose to represent Sarthe. Two months later when the Directory became the new government of France, Carnot was selected one to be one of the five Directors.

The Directory was never a popular government and in 1797 as royalists began to gain power in the government, some of the Directors enlisted the army's support to stage a coup d'état that became known as the Coup of 18 Fructidor. Carnot was no royalist but he had opposed some of the Directory's questionable policies, and therefore when the coup succeeded the other Directors ordered him arrested and deported to Cayenne. Instead, Carnot dodged arrest and fled abroad to Switzerland and Germany. After Napoleon seized power in November of 1799, Carnot returned to France the next month. The next year Napoleon personally led the Army of the Reserve into Italy, taking his chief of staff General Berthier with him, and during this time Carnot served as Minister of War until Berthier returned to the post in October.

In 1802 Carnot joined the Tribunate, but he openly opposed the the establishment of the Legion of Honor, the Consulate of Life, and finally the Empire. Due to this, he mostly retired from public service and spent time his time working on science and mathematics. Napoleon commissioned him to write a textbook for military engineers and Carnot published A Treatise on the Defense of Fortified Places in 1810.

In 1814 as France was once again directly threatened, Carnot offered his services to Napoleon, who promoted him to général de division and made him Governor of Antwerp. Carnot held out at Antwerp until May, well after Napoleon's abdication. The next year when Napoleon escaped from exile for the Hundred Days, Carnot again offered his services, and Napoleon named him Minister of the Interior, a Peer of France, and a Count of the Empire. After the loss of the Battle of Waterloo, Carnot tried unsuccessfully to convince Napoleon to dissolve the legislature and seize power, but Napoleon abdicated instead.1

Carnot was next proscribed by the returning Bourbons and he fled abroad again, traveling to Belgium, Germany, Austria, and Poland before finally residing in Magdeburg in 1816. He was never able to return to France again, though his children and grandchildren became prominent and successful French citizens.