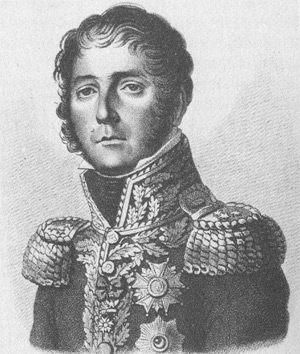 Originally intended by his family to join the church, Horace-François-Bastien Sebastiani de la Porta instead joined the military in 1789 when he became a sous-lieutenant in the regiment of Vintimille. Four years later in 1793 he was promoted to lieutenant in the 15th Battalion of Light Infantry and sent to Corsica. The next year Sebastiani joined the Army of the Alps and he became an aide-de-camp to General Casabianca, and then in 1795 he received a promotion to capitaine. Next he joined the cavalry and served with the 9th Dragoons before spending a short period of time in Paris. Sebastiani then joined the Army of Italy where he took part in the campaign of 1796 under General Bonaparte. He served at the Battle of Dego where he was shot in the right wrist and later that year he fought at the Battle of Arcola . In early 1798 Sebastiani was promoted to chef d'escadrons and then in April of 1799 he received a promotion to chef de brigade. Barely more than a week later, he was taken prisoner in the fighting at Verderio but he was almost immediately released. Next Sebastiani served in the garrison at Paris and he contributed to Napoleon's coup of 18 Brumaire. Serving in the Army of the Reserve the next spring, he fought at the Battle of Marengo in June and then in December he served at the crossing of the Mincio and at Monzembano. In January of 1801 Sebastiani occupied Treviso and with Marmont he helped to negotiate the armistice with the Austrians.

In October of 1801 Sebastiani was sent on a mission to Turkey. The next year he traveled to Egypt and then in 1803 he was promoted to général de brigade. After returning to France, he was first sent to Amiens and then to the camp of Utrecht. Once the campaign of 1805 began, Sebastiani took command of the 1st Brigade of Dragoons of Walther's division. That November he entered Vienna at the head of the advance guard and he then followed the Russian rearguard and fought them at Pohrlitz. Sebastiani went on to fight at Wirschau at the end of November, and then he served at the Battle of Austerlitz in December where he was wounded by a shot. A few weeks later he received a promotion to général de division. In 1806 Sebastiani took command of the 2nd Division of General Marmont's II Corps, but halfway through the year he was replaced and instead sent as ambassador to Constantinople. In this capacity he helped helped convince the Ottoman Empire to declare war on Russia and later he played a significant part in organizing the defense of Constantinople that successfully repulsed a British attack in 1807. For his achievements, he was rewarded with the Grand Eagle of the Legion of Honor in 1807.

By 1808 Sebastiani had returned to France and joined the army in Spain, taking command of the 1st Division of IV Corps. With this division, he served at Durango, Guenes, and Valmaceda before taking command of the corps in February of 1809. That year, Sebastiani led his men into battle at Ciudad-Réal, Talavera , Almonacid, and Ocaña . In 1810 he took part in the conquest of Andalusia, was victorious at Alcala la Réal, occupied Grenada, and was victorious at Malaga, Castrit, Rio Almanzor, and Baza. In the meantime Sebastiani was made a Count of the Empire in recognition of his contributions.

In mid 1811 Sebastiani left his command to return to France, and the next year he took command of the 2nd Cuirassier Division of Montbrun's II Cavalry Corps before trading commands with General Watier to command the 2nd Light Cavalry Division. Taking part in the Russian campaign of 1812, he battled with Wittgenstein at Drissa, but then in August he was surprised by Platow at Inkowo. Regardless, he kept his command, and after the deaths of Generals Montbrun and Caulaincourt at the Battle of Borodino, he took command of the II Cavalry Corps. During the retreat from Russia, his men were roughly handled at Winkowo, and his reputation began to suffer. Because of this and the events earlier at Inkowo, some soldiers began to refer to him as "General Surprise", feeling that he did not employ proper reconnaissance and was too easily surprised.1 In December of 1812 he was placed in charge of all the cavalry of the Grande Armée, though admittedly there were not many who had survived the retreat.

With the rebuilding of the army in early 1813, General Sebastiani took command of a reformed II Cavalry Corps under Prince Eugene. After fighting at Sprottau and Katzbach in the summer, Sebastiani went on to fight at the Battle of Leipzig that October where he was wounded by a lance blow to the chest. In the retreat from Leipzig that followed, he served at the Battle of Hanau before being placed under Marshal Macdonald's orders. During the defense of France of 1814, Sebastiani continued to command a cavalry corps under Marshal Macdonald. After commanding at Troyes, he evacuated the city and then served at Reims. In March Sebastiani took command of three cavalry divisions of the Imperial Guard and he fought at Arcis-sur-Aube and Saint-Dizier. With the return of the Bourbon monarchy after Napoleon's abdication in April, he was recognized as a Knight of Saint Louis but not employed.

When Napoleon returned from exile in Elba in 1815 to resume power for the Hundred Days, Sebastiani rallied to him and was given a position with the National Guard. He was also elected as the representative of Vervins to to the Chamber of Representatives. Ordered to defend the right bank of the Seine, Sebastiani did not take part in the campaign that June. After Napoleon's second abdication and the Second Restoration of the Bourbons he was put on non-activity. Sebastiani later entered politics, though he did not see much success until after the July Revolution of 1830 and the ascension of Louis-Philippe to the throne of France. He eventually became Minister of Marine, Foreign Minister, ambassador to Naples, ambassador to London, and a Marshal of France.