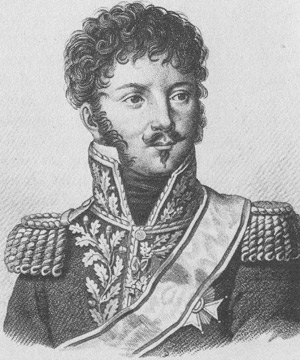 Montbrun's distinguished military career began when he enlisted in the chasseurs of Alsace in May of 1789. In time, he would marry the daughter of General Joseph Morand, and his younger brother Alexandre would also distinguish himself as a cavalry leader. During the early years of the Revolution Montbrun served in the Army of the North and the Army of the Moselle, and in 1794 he was transferred to the Army of the Sambre and Meuse and promoted to sous-lieutenant. The first of Montbrun's many courageous acts came in 1796 at the combat of Altendorf. Despite being covered in wounds, he fought off the enemy and prevented General Richepanse from falling into enemy hands, and afterwards he was rewarded with a promotion to lieutenant.

After a promotion to capitaine in 1797, Montbrun was transferred to the Army of Mainz in 1798 and later to the Army of the Rhine. In October of 1799 he led a successful attack on one of the bridges near Frankfurt, and he was promoted to chef d'escadrons after the battle. Less than a week later, at the fighting near Gross-Gerau he was wounded by two saber blows, one to the face and one to the left arm. After a short time with the 5th Dragoons in March of 1800, Montbrun was transferred to the 1st Chasseurs à Cheval. With this unit, he distinguished himself at Erbach and defended the defile at Kirchberg in June, and Richepanse rewarded him with a promotion to chef de brigade and command of the unit. Later he was stationed at Ulm, and he successfully repulsed a sortie against the garrison.

From 1803 to 1805, Montbrun served at the camp of Bruges. In September of 1805 he was placed in a brigade in Davout's III Corps, with which he distinguished himself at the combat of Reid and fought at Austerlitz. Three weeks after Austerlitz, Montbrun was promoted to général de brigade, and shortly thereafter he was transferred to the Army of Naples. After briefly serving under Reynier, he was placed under General Espagne's command until he was called back to the Grande Armée in September of 1806. Taking command of the Wurtemberg cavalry under Vandamme in October, he was placed in Jerome Bonaparte's IX Corps in Silesia that November. Montbrun served admirably at the siege of Breslau, and won small battles at Strehlen and Ohlau.

In March of 1807, Montbrun took command of the V Corps cavalry from Debelle, and then in June he distinguished himself by recovering the camp of Borki from the enemy. The year of 1808 was a year of rewards for Montbrun as he was created a Baron of the Empire and awarded the Grand Cross of the Military Order of Wurtemberg. Service in Spain followed, as he was sent there to take command of the light cavalry of Victor's I Corps. That November, as the Spanish defended the pass at Somosierra , the first assault to take the position was repulsed. Napoleon called upon Montbrun to lead the Polish light cavalry in a new assault, and the successful charge became a legend for the history books.

The following January Montbrun returned to Paris and he was then promoted to général de division. By April he had been placed under Marshal Davout, and he served at Thann, Schierling, Eckmühl, Nittenau, Raab , and Acs. All this fighting earned him more rewards, and this time he was made a Knight of the Iron Crown and a Count of the Empire.

In April of 1810 Montbrun was sent back to Spain to take command of the cavalry of the Army of Portugal. He first served at the siege of Almeida, and though he did not take part in the Battle of Bussaco , after the battle he successfully turned the English position. After fighting at Alenquer and Fuentes de Onoro , the next year he was made a Grand Officer of the Legion of Honor. In September of 1811 he was victorious at El Bodon, and then in December he traveled to Aragon with reinforcements.

General Montbrun returned to France in January of 1812, and the next month he took command of the II Cavalry Corps in Murat's Cavalry Reserve. Serving on the Russian campaign, he fought and was victorious at Swentsiany, and then again near the Dvina River. During this campaign, the Russians mounted a counterattack against his unit. Suffering from an attack of gout, Montbrun was unable to pull on his boots, and so mounting his horse, he simply rode to battle without his boots.1

Montbrun had a presentiment about his upcoming fate at the Battle of Borodino.2 Soon after the start of the battle, he was hit directly in the stomach by shell fragments. As he was hit he exclaimed, "Good shot!" and then fell to the ground.3 A few hours later he was dead, and General Caulaincourt assumed his command, only to be killed within a few hours too.