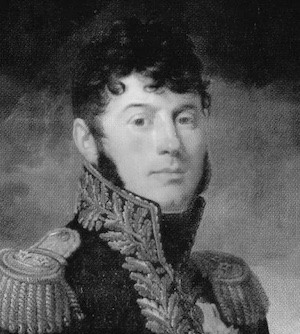 Cavalry general and younger brother of the artillery general Debelle

The younger brother of Jean-François-Joseph Debelle, César-Alexandre Debelle also embarked on a military career. In 1787 he joined his brother as a gunner in the artillery regiment of Auxonne but in October of 1789 he decided to switch branches, joining the cavalry regiment of the 1st Chasseurs à Cheval. Debelle was promoted to sous-lieutenant in the 12th Dragoons in 1791 and then in 1792 he was sent to the Army of the North. In the following years Debelle was promoted to lieutenant and he served in the Army of the Rhine and the Army of the Alps.

In 1796 Debelle joined the Army of the Sambre and Meuse and received a promotion to capitaine. The next year, in February of 1797, he was promoted to chef d'escadrons and barely a month later he was promoted again, this time to colonel of the 11th Dragoons. That April he led his men into action at Altenkirchen. In 1798 Debelle served in the Army of England and then in 1799 he joined the Army of Italy, fighting at the Battle of Novi in August. The year 1800 saw Debelle serving in Nansouty's brigade and fighting at Salzbourg in December.

In 1803 Debelle served with the Army of Hanover before joining the Army of the Coasts of the Ocean in 1804. The following year he was promoted to général de brigade and employed in the 7th military division. Later that year Debelle was appointed commander of the département of Montenotte and then given command of the 1st Brigade of Espagne's division in the Army of Italy. In 1806 he served in Mermet's division in the Army of Naples until he was recalled to the Grande Armée in Prussia at the end of October. Once he joined back up with the Grande Armée, Debelle took command of a brigade of light cavalry in V Corps. In July of 1807 he was recognized as a Commander of the Legion of Honor and in 1808 he was named a Baron of the Empire.

In 1808 General Debelle was sent to Spain to take command of the 1st Brigade of Milhaud's 3rd Division of Dragoons. During the pursuit of the English army commanded by Sir John Moore, in December he was surprised by the English at Sahagun and much of his brigade was lost. A few months later Debelle was placed under the orders of General Franceschi and then in August of 1809 he was recalled to France. After returning to France, Debelle was put on non-activity in September of 1809 and then finally retired in 1812.

In March of 1815 when Napoleon escaped from Elba, Debelle rallied to him and Napoleon ordered him to take command of the département of Drôme. Debelle entered Valence on March 15 but at the end of the month he was wounded by a bayonet of a National Guardsman who thought he had betrayed Napoleon. Debelle and his forces were then driven out of Montélimar and beaten at the bridge of Loriol by the Duke of Angoulême. However, before long the Duke of Angoulême was defeated and Debelle was then named commander of the département of Mont Blanc.

After Napoleon's second abdication, Debelle was proscribed by the returning Bourbons. He was taken prisoner at Grenoble and then brought before a council of war which in March of 1816 condemned him to die. King Louis XVIII commuted Debelle's sentence to ten years of imprisonment and Debelle was sent to the citadel of Besançon to serve out his sentence. In July of 1817 he was released and retired from the army.

Please see the Appendix about the name DEBELLE on the Arc de Triomphe.