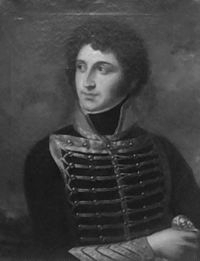 Jean-François-Joseph Debelle first joined the military when he enlisted in the Artillery Regiment of Auxonne in 1782. By the start of the Revolution in 1789 he had only risen to sergeant, but then in September of 1789 he received a promotion to lieutenant. The next year Debelle was promoted to capitaine and then given a position in the 2nd Company of Horse Artillery at Metz. In 1793 he participated in the attack of the camp of Pirmasens and was then promoted to chef de bataillon by the representatives of the people near the Army of the Moselle. Debelle went on to distinguish himself at the receovery of the lines of Wissembourg and the deliverance of Landau, and he was named a général de brigade by the representatives of the people, however this was promotion was not confirmed.

March of 1794 saw Debelle promoted to chef de brigade and he then took part in the action of Arlon. That June he fought at the combat on the Sambre where he had two horses killed under him and received four sabre blows. Three months later he was promoted to général de brigade, and this time the promotion was confirmed. Debelle next served at the siege of Maestricht where he distinguished himself.

In September of 1795 General Debelle crossed the Rhine at the front of his troops despite the fire from the enemy. The next year he was named deputy commander of the artillery of the Army of the Sambre and Meuse and then promoted to général de division. In 1796 Debelle married Marguerite Justine Dechaux, making him a brother-in-law to General Hoche who had also married a daughter of the Dechaux family. Debelle and Hoche became friends, and Debelle commanded the artillery of the first expedition to Ireland under Hoche in late 1796. After that expedition failed, Hoche was named commander-in-chief of the Army of the Sambre and Meuse, and he took Debelle along with him, naming Debelle the commander of the artillery. Debelle distinguished himself that April at Neuwied.

In 1797 Debelle's friend and brother-in-law Hoche died, and Debelle was then named inspector general of the 4th arrondissement of artillery. At the end of 1798 he was appointed commander of the artillery of the Army of Italy, and therefore during the campaign of 1799 he commanded the artillery at the Battle of Novi . In 1800 Debelle was named commander of the left wing of the Army of the West and then in 1801 he returned to the Army of Italy before being authorized to return to his home to rest.

At the end of 1801, General Debelle was named the commander of the artillery of the expedition to Saint-Domingue. Taking part in that campaign, he was badly wounded in March of 1802 during the attack on Fort Crête-à-Pierrot. He survived that wound only to succumb to yellow fever a few months later. His brother César-Alexandre Debelle went on to have a successful military career during the French Empire.

Please see the Appendix about the name DEBELLE on the Arc de Triomphe.