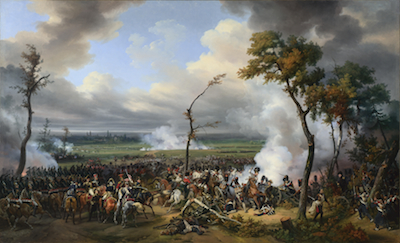 As the French retreated from the disaster at Leipzig, Bavarian General Wrede moved to cut off their line of retreat at Hanau. General Wrede expected the main French army to be farther north and intended to stop only a flank force of the French army, perhaps only a corps. Unfortunately for Wrede, Hanau was directly in the French army's path, and the French were not too happy about Bavaria's recent betrayal of France. In fact, Wrede had served alongside the French in many battles. Until recently, Bavaria had been one of France's staunchest allies of the time.

Wrede had 43,000 Bavarian and Austrian troops, but made the mistake of splitting his force on opposite sides of the Kinzig River. As Napoleon arrived on the scene, he immediately grasped the opportunity and issued orders. Due to the dense woods around Hanau, the French were able to move close to the Bavarian positions virtually undetected.

Since there was only one bridge across the river, Wrede was unable to bring his troops from the other side to reinforce his positions under attack. Before long, the Bavarian left was trying to cut its way out to the left due to their inability to retreat across the bridge, but Sebastiani's cavalry continued to maul them and offer no escape. The pressure on the Bavarians was too great as the French relentlessly attacked them and forced them back against the river. Hundreds of Bavarians drowned as they were pushed back by the French, but Wrede managed to rally his forces on the safer side of the river in Hanau.

Napoleon did not care to pursue Wrede into Hanau, as the road west was all that he needed for his plans, and it was now cleared. As the French army continued west, a smaller force was left to deal with Wrede, and moved into Hanau the next day with little resistance. Wrede had learned his lesson and abandoned Hanau, and the French had satisfied some of their rage at Bavaria's betrayal and the outcome of Leipzig.