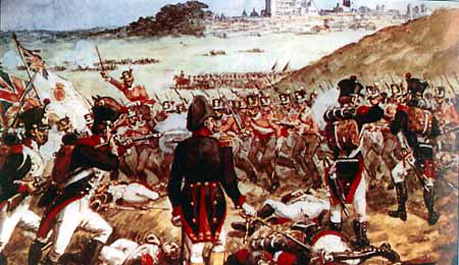 Wellington had decided to eliminate the threat of French Marshal Marmont's Army of Portugal in central Spain. Both commanders maneuvered their forces back and forth, trying to gain the upper hand but making little progress. Finally, Marmont had received reinforcements and advanced to take on the British.

After a skirmish on the 21st of July, Wellington ordered his supplies and hospitals evacuated, expecting to be forced to fall back. Marmont saw the dust clouds and deduced that the British were retreating and immediately ordered his divisions westward to attempt to catch the British and cut off the retreat. Unknown to Marmont, the bulk of the British army was not retreating and they were in fact hidden by the terrain in an east-west line. When Wellington realized Marmont's mistake, he took advantage of the situation to attack each French division in turn as it passed. Both Marmont and his second in command Bonet were badly wounded, and General Clauzel assumed command of the French army. While Clauzel was able to stabilize the situation, he eventually ordered a retreat. The French had lost badly and lost control of central Spain, but they were not pursued with much effort.