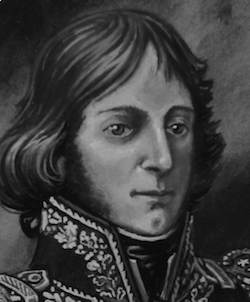 In April of 1795 Conroux was promoted to capitaine and then in October he became an aide-de-camp of General Bernadotte. In July of 1796 he served at the attack on the redoubt of Bendorf and then at the crossing of the Rhine, and the next month he received a promotion to chef de bataillon. Conroux followed Bernadotte to join the Army of Italy in early 1797, and that March he distinguished himself at the crossing of the Tagliamento and then he served at the action of Gradisca. In October he became an aide-de-camp to General Championnet who was commanding the right wing of the Army of England. Conroux took part in the defense of Ostend from the British and the defense of Malines against insurgents. Next he followed Championnet to the Army of Mainz and then the Army of Rome. In January of 1799 Championnet promoted Conroux to chef de brigade while retaining him as his aide-de-camp. Conroux served at Fossano and Mondovi in November of 1799. After Championnet's death in early 1800, Conroux was then attached to the staff of the Army of the West under Bernadotte.

In October of 1802 Conroux was given command of the 17th of the Line. His unit became part of the 1st Division of the Army of the Coasts of the Ocean under General Davout. In June of 1804 Conroux served at the naval combat of Blankenberge. As war got underway in 1805, Conroux and his men served as part of Bisson's 1st Division of Marshal Davout's III Corps. He took part in the campaign that fall and fought at the combat of Lambach in October and at the Battle of Austerlitz in December. On Christmas Eve Conroux was promoted to général de brigade. In 1806 he was named commander of the 2nd Brigade of Desjardin's division in Marshal Augereau's VII Corps. That fall Conroux took part in the campaign against Prussia and he fought at the Battle of Jena where he was wounded. In November he was transferred to command a brigade of Oudinot's grenadier division. In February of 1807 Conroux served at Ostrolenka and later that year he served at the Siege of Danzig . Continuing to fight, he served at the Battle of Heilsberg and the Battle of Friedland in June. After the latter victory, he was named a Commander of the Legion of Honor. In 1808 Conroux was named Baron of Pépinville and in 1809 he took command of a brigade in Tharreau's division for the Danube campaign. That July he commanded the advance guard at the crossing of the Danube and he then served at the Battle of Wagram . Afterwards he was promoted to général de division and then sent to the Army of Antwerp.