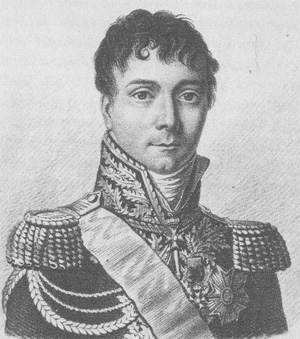 The son of an officer and a noble, Charles Étienne César Gudin's military career began when he attended the military school of Brienne. After completing his studies, he became a gendarme in the royal guard in 1782, and a few years later he was appointed a sous-lieutenant in the infantry regiment of Artois. After the advent of the French Revolution, in 1791 Gudin was promoted to lieutenant and that January he and his regiment set sail for Saint-Domingue to take part in putting down the revolt there. Once in Saint-Domingue, he took part in the fighting against the insurgents. Gudin returned to France in July of 1792 and he was sent to his depot. The following year he became an aide-de-camp to his uncle, General Étienne Gudin. After serving with his uncle for a few months Gudin was next assigned to serve as an aide-de-camp to General Ferrand who commanded the Army of the Ardennes. In December of 1793, Gudin received a promotion to chef de bataillon and then in April of 1794 he joined the staff of the Army of the North. By June of 1795, he had been promoted to chef de brigade and he was serving in the Army of the Rhine and the Moselle. In April of 1796 Gudin joined Duhesme's division and then in July he seized the town of Wolfach. Next he was appointed chief of staff to General Gouvion St. Cyr and in the meantime he served a brief interlude as the chief of staff to the garrison at Kehl before returning to Gouvion St. Cyr's staff. Gudin served in Ambert's division in 1797and in 1798 he was designated for the Army of England and later the Army of Mainz.

In 1799 Gudin was promoted to général de brigade and he took command of a brigade and at various times he served under Souham, Soult, and finally Lecourbe. Now serving as part of the Army of Switzerland, in August Gudin seized the pass at Grimsel and then rejoined Lecourbe to assist in the fighting at l'Oberalp. The next month Suvorov's attacks drove Gudin out of Airolo and Saint-Gothard, but Gudin was able to retake the lost ground in the coming weeks. That October he became chief of staff to Lecourbe's corps on the right in the Army of the Rhine and he took part in the battle around Philipsburg. In May of 1800 Gudin fought at Stein, Stockach, Messkirch, and Memmingen, all in one week. When Vandamme was ordered to return to France, Gudin assumed command of Vandamme's former division under Lecourbe. With this division Gudin served in the crossing of the Lech and then fought at Hoechstaedt and Neubourg. That July he received a promotion to général de division and later that month he seized Fussen. For the campaign of December of 1800, Gudin led his division in the passage of the Inn River and he fought at Salzbourg.

Administrative positions followed during the years of peace and in August of 1803 Gudin commanded the 10th military division at Toulouse. The next year he was sent to the camp at Bruges to take command of Davout's 3rd Infantry Division in what was to eventually become the legendary III Corps. When in 1805 the army marched east to confront the Third Coalition, Gudin led his division throughout the campaign, but his division was too far away to take part in the Battle of Austerlitz. The next year Gudin led his division during the Prussian campaign and he was wounded during the fierce fighting at the Battle of Auerstädt. In the pursuit that followed, Gudin seized Custrin on the 1st of November and entered Warsaw four weeks later. After fighting at Nasielsk and Pultusk in December, he went on to take part in the Battle of Eylau in February of 1807. Rewards followed for his excellent service as he was created a Count of the Empire and a Commander of the Order of Saint Henry of Saxony.

When Austria invaded Bavaria in April of 1809, Gudin was serving with Marshal Davout's III Corps in the Army of Germany. That month he led his division into battle against the Austrians at Thann, Abensberg, Eckmühl, Ratisbon, and Wittenau. Unable to take part in the fighting at Aspern-Essling due to the bridge being broken, at the end of June his division seized the area around the isles within the Danube where the army was to cross again. During the fighting at the Battle of Wagram in July, Gudin was hit by shots four times, and the next month he received the honor of a Grand Eagle of the Legion of Honor.

Gudin remained with his division in Germany for the next few years, cantonned first in Westphalia and then at Magdebourg. For the Russian campaign of 1812 he again led his division as part of Marshal Davout's corps. Gudin fought at Smolensk on August 17th. Only two days later he fought at the Battle of Valutina. He was leading Gérard's brigade when he was struck by a cannonball that took off one of his legs and shattered the calf of the other. Gudin was transported to Smolensk where he died on the 22nd.