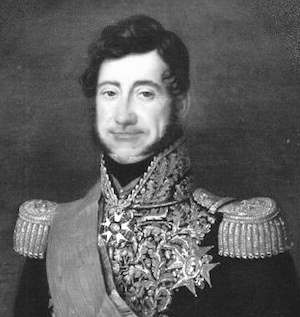 A younger brother to Charles Étienne César Gudin, Pierre César Gudin entered the military school of Brienne in 1785. Commissioned as a sous-lieutenant in the 48th Infantry in February of 1793, Gudin served at Mainz later that year. After the French surrender at Mainz he was sent to serve in the Vendée along with the other French soldiers who had promised not to fight the Coalition for a year. That September Gudin fought at Clisson where he was wounded by a shot to the left arm. Two years later in December of 1795 he became an aide-de-camp to his uncle General Gudin and then in 1796 he joined the Army of the Rhine and Moselle. Next Gudin joined the Army of Italy in 1797 and later the Army of Naples. In March of 1799 he took part in the assault of Civita Vecchia where he was wounded by a shot of grapeshot to the kidneys. In 1800 Gudin joined the Army of the Rhine where he served as aide-de-camp to his brother General Gudin. That May he was promoted to capitaine and in June he took part in the crossing of the Danube near Hochstedt where he was wounded in the right hand by grapeshot.

In 1804 Gudin was promoted to chef de bataillon and he continued to serve as aide-de-camp to his brother over the next few years, taking part in the campaigns of the Grande Armée. In March of 1807 he was promoted to colonel and that July he was assigned to the general staff. Gudin joined Marshal Berthier's staff in 1808 and in 1809 he served with them throughout the Danube campaign against Austria. That July he fought at the Battle of Wagram where he was wounded by a shot to the left arm. A few weeks later he was given command of the 16th of the Line.

In 1810 Gudin was named a Baron of the Empire and he was sent to Spain to serve with the Army of Aragon. The next year he served at the attack of the fort of Sagonte in September where he was wounded in the upper jaw by the blast of a grenade. The following month Gudin served in Montmarie's brigade at the Battle of Saguntum. After receiving a promotion to général de brigade in January of 1812 he continued to serve with the Army of Aragon. In 1813 Gudin served at the combats of Yecla and Villena in April and then in September he took command of a brigade of Habert's division. In January of 1814 he was directed to return to Lyon with his brigade and in February he joined Musnier's division. Taking part in the defense of France, he won at Poligny and served at Limonest in March.

After Napoleon's abdication and the Bourbon Restoration, Gudin was named a Knight of Saint Louis but also placed on non-activity. When Napoleon returned and resumed power in 1815, he placed Gudin in the V Corps to serve under General Rapp. That June Gudin joined Rottembourg's division and he fought at Hoenheim, also known as La Suffel. He continued a successful military career after the Hundred Days.