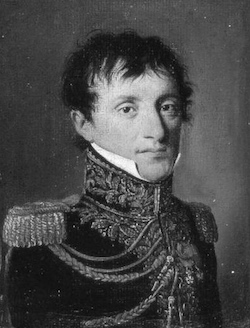 Louis-Pierre-Aimé Chastel first joined the French military when he joined the cavalry of the Légion Allobroge as a lieutenant in August of 1792. First posted to the Army of the Alps, he then went to Italy and then returned to France to serve at the Siege of Toulon . In January of 1794, Chastel received a promotion to capitaine and then a few weeks later he joined the 15th Dragoons. For the next few years he served in the Army of the Eastern Pyrenees before joining the Army of Italy in 1796. The following year he was wounded was wounded by a saber blow to the head during the crossing of the Tagliamento.

In 1798 Chastel was designated for the Army of the Orient and he took part in that expedition as part of Desaix's troops. During his time in Egypt, he discovered the Dendera zodiac. After returning to France, Chastel was promoted to chef d'escadrons in 1802. The next year he was assigned to the camp of Compiègne where he served with the 24th Dragoons.

In 1808 Chastel was rewarded as a Baron of the Empire and then went to Spain, where he fought at Burgos. The next year he took part in the Danube campaign against the Austrians. Chastel's next major assignment came in 1811 where he commanded the Grenadiers à Cheval of the Imperial Guard who were serving in Spain. While there he received a promotion to général de brigade.

In 1812 General Chastel received a promotion to général de division and left the Guard to take command of the 3rd Division of Light Cavalry of the III Cavalry Corps. In this position he fought at Borodino in September of that year. He took part in the campaigns in Germany in 1813, commanding a light cavalry division throughout the campaigns. During the fighting of 1814, Chastel briefly took command of a cavalry corps and took part in the defense of Paris. Afterwards, he was put on non-activity.

When Napoleon returned from Elba, Chastel rallied to Napoleon and was given command of a cavalry division in the army. During the campaign that June, he commanded the 10th Dragoon Division which served as part of Exelmans' corps. After Napoleon's second abdication, Chastel was put on non-activity and he retired to Switzerland.