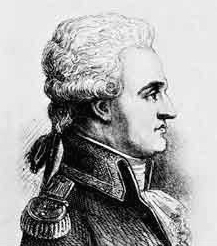 Born into the nobility, Pierre-Charles-Jean-Baptiste-Sylvestre de Villeneuve began a long career in the French navy when he joined as a garde de la marine in 1778. In 1781 he was placed on the ship Marseillais as part of the Count de Grasse's squadron which took part in the American Revolutionary War. Villeneuve served during the combat of April 29, 1781 and afterwards he was promoted to ensign of vessel. He later served later at the action of Tobago on May 30th, 1781. Continuing his combat experience, he distinguished himself at the combat of September 5th and then in early 1782 he fought on January 25th and 26th at Saint-Christophe. Villeneuve next went on to fight at the naval combat of Saintes on April 12th of 1782.

After the conclusion of the American Revolutionary War, Villeneuve served on the vessel Blonde and was promoted to lieutenant of vessel in 1786. In early 1789 he went on leave and did not return to the navy until 1792. Given the large number of naval officers emigrating from France, Villeneuve's opportunities for promotion quickly improved. February of 1793 saw Villeneuve promoted to captain of vessel but ten months later he was relieved of his command due to his noble birth. Finally reintegrated into the navy in 1795, that year he was appointed commander of the navy at Toulon. In 1796 Villeneuve received a promotion to rear admiral and he was ordered to conduct a squadron from Toulon to Ireland to take part in the expedition to Ireland. Unfortunately for the expedition, by the time his squadron reached Lorient on the other side of France they were too late to take part.

In 1798 Admiral Villeneuve was given command of a squadron of the fleet under Admiral Brueys for the expedition to Egypt. His flagship became Guillaume-Tell and after successfully transporting the troops to Egypt, the French fleet was attacked at the Battle of the Nile by the British fleet under Admiral Nelson. Villeneuve commanded the right wing during that battle and once he realized the battle was lost he ordered a retreat and escaped with two vessels and two frigates. Villeneuve next returned to Malta and stayed there where he was appointed commander of the fleet defending Malta. When the English came to take Malta, he participated in the defense of the island and was taken prisoner when the French finally surrendered in September of 1800.

Villeneuve returned to France after the Peace of Amiens in 1801. In 1802 he was appointed commander of the naval forces of the Windward Isles, a position he remained in until June of 1803. The following year Villeneuve was promoted to vice admiral and he took command of the naval forces of the isle of Aix. After being summoned to Paris by Napoleon, he learned that he was to take command of the fleet at Toulon.

In March of 1805 Admiral Villeneuve was ordered to lead the fleet from Toulon to Brest in preparation for sailing to the English Channel to protect the transport of the French army across the channel to wage war against Great Britain. Despite not believing the plan would work, Villeneuve remained in command and set sail, and that April he joined up with a Spanish fleet under Admiral Gravina at Cadiz. Next they sailed for Martinique where in June they were joined by more ships under Rear Admiral Magon. After taking Fort Diamant, the combined French-Spanish fleet sailed back for Europe and encountered a British fleet under Admiral Calder at Cape Finisterre. The battle was indecisive but afterwards the French-Spanish fleet sailed on for Corunna where they joined another squadron that had sailed from Ferrol, further increasing the size of the fleet.

Napoleon ordered Villeneuve to continue on to Brest to complete the plan, but Villeneuve disregarded these orders and instead sailed for Cadiz to resupply and repair his ships. However, after arriving in Cadiz he learned that Napoleon planned to remove him from command for his lack of initiative and drive. Despite his and his captains' better judgment, Villeneuve ordered the fleet to leave Cadiz in October to show the Emperor his drive and prevent a successor from taking command of the fleet. Meanwhile a British fleet under Admiral Nelson was waiting for a chance to destroy the French and Spanish fleet, and once given this opportunity, they struck at the Battle of Trafalgar, badly defeating the French and Spanish. Admiral Nelson was mortally wounded during the battle, as was Spanish Admiral Gravina, but Admiral Villeneuve was captured by the British and transported to England.

Villeneuve was released by the British and he returned to France on April 11, 1806. Next he made his way to Rennes, where on April 22nd he was found dead in his hotel room with six wounds to the chest and a suicide note that explained that death was the only way to meet his disgrace. Some rumored that Villeneuve had been assassinated, but an official investigation concluded that he committed suicide, and his despondent behavior after Trafalgar left little room for doubt.