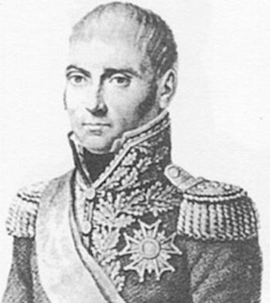 Général de division who surrendered at Bailen and was disgraced

The younger brother of General Dupont-Chaumont, Pierre Dupont de l'Étang's first military service came in 1784 at age fifteen when he was commissioned a sous-lieutenant in the service of Holland. In 1787 was promoted to lieutenant in the artillery and he remained in Holland's service until 1790 when he returned to France. With the Revolution well under way, in 1791 Dupont was appointed a sous-lieutenant in the 12th Infantry. That October he became an aide-de-camp to General Théobald de Dillon and then in early 1792 he received a promotion to capitaine. Dupont was with General Dillon at Baisieux on April 29, 1792 when the soldiers mutinied against his command. Trying to defend the general, Dupont took a shot to the face from a pistol and General Dillon was shot and killed. Only a few days later, Dupont made his way to Valenciennes where he became an aide-de-camp to General Dillon's brother, General Arthur Dillon.

In the summer of 1792 Dupont was named a Knight of Saint Louis. That September General Dumouriez promoted him to lieutenant colonel and then Dupont served at the defense of Les Islettes and became chief of staff of the troops active in Belgium. In April of 1793 General Dampierre promoted Dupont to chef de brigade and appointed him chief of staff to Lamarlière. A few months later in July Dupont was sent to the camp of Madeleine as chief of staff, and then in August he was promoted to général de brigade by the representatives of the people with the Army of the North. General Dupont went on to serve at Tourcoing, Werwicq, and Menin until he and his brother were suspended from their functions in September. Dupont and his brother then retired to Chabanais.

Dupont remained out of the military until after a change in government. Once he returned, he served under his brother during the unrest of 13 Vendémiaire which brought about Napoleon Bonaparte's rise, but the Dupont brothers somehow avoided battle with the royalists. Afterwards, Dupont was named director of topography and military history by the Directory, and in May of 1797 he was promoted to général de division and named director of the depot of war for a short period of time.

In 1799 Dupont supported Napoleon's coup d'état and then in 1800 he was appointed chief of staff to General Berthier in the Army of the Reserve. Serving on the campaign that spring, he was one of the first to enter the city of Bard and distinguished himself in the attack on Fort Bard. Dupont went on to serve at the Battle of Marengo and the day after the battle he negotiated the Convention of Alexandria. Next he was placed in charge of the French government in Piedmont where he remained until August when he took command of the right wing of the Army of Italy. On Christmas Day of 1800, Dupont won at Pozzolo over 45,000 Austrians despite having only 15,000 men with him.

General Dupont returned to France in 1801 and then in 1802 he took command of the 2nd military division at Mézières. The following year he was sent to the camp of Compiègne where he took command of a division under General Ney. At the end of the year his division moved to the camp of Montreuil, and then two years later when war broke out in 1805 Dupont's division became the 1st Division of Marshal Ney's VI Corps. Taking part in the campaign against Austria, Dupont and his men crossed the Rhine in September and then won at Hasslach and Albeck in October. In November he was temporarily placed under the command of Marshal Mortier, leading to the close fought Battle of Dürenstein along the Danube.

When Prussia declared war in 1806, Dupont took command of the 1st Division of Marshal Bernadotte's I Corps. Under Bernadotte he missed out on the twin battles of Jena and Auerstadt but he fought at Halle on October 17th where he defeated a Prussian corps. Continuing to serve, Dupont saw action at Nossentin and Lubeck in November and then at Mohrungen and Grabau in January of 1807. When the campaign resumed later that year, Dupont was still commanding the 1st Division of I Corps. After Bernadotte was wounded, General Victor replaced him in command of I Corps. On the morning of the Battle of Friedland, Dupont asked Napoleon why he had chosen Victor over himself to command the corps. Annoyed, Napoleon responded that Berthier had recommended Victor and ended the conversation.1 Dupont went on to serve well at the Battle of Friedland and afterwards he was awarded the Grand Eagle of the Legion of Honor. However, he further resented Victor's achievements when Victor was appointed a Marshal of the Empire.2

At the end of 1807 General Dupont was named commander of II Corps and sent into Spain. After the French occupied Madrid in 1808, Dupont was sent to Andalucia to take control there. Early in July he was appointed a Count of the Empire and next he defeated a Spanish force at Alcolea and then took Cordova. Overconfident and eager for glory, he was cut off by the Spanish and fought and lost the Battle of Bailen. Wounded by a shot to the kidneys and unable to break out of the Spanish forces encircling his men, Dupont surrendered his entire corps to Spanish General Castanos on the promise that they would be repatriated to France. Upon learning of the defeat, Napoleon was furious as this was the first major defeat of a French army under Napoleon's government. Furthermore, the Spanish army had a poor reputation yet Dupont had surrendered to them instead of fighting his way free.

Dupont's surrender had numerous consequences throughout Europe. The Spanish victory gave new life to the Spanish insurgency resisting the French occupation. The Austrian Empire, ambitious to strike at France and her allies, gained a renewed sense of confidence and prepared for an offensive against France and her allies. The Spanish refused to honor the terms of the surrender that allowed the French to return home, and Dupont and some of his staff were only able to return to France due to British intervention. The majority of the Dupont's men who were taken prisoner would die in captivity due to poor treatment.

Napoleon's rage against Dupont's failure was unprecedented. He railed that "Dupont has dishonored our flag! What incapacity, what cowardice!"3 As soon as General Dupont landed back at Toulon, he was immediately arrested. A commission was formed to investigate his conduct and he was stripped of his rank and titles but released in 1809. In February of 1812 Dupont was again arrested and conducted before a council of war. At the time Napoleon had established new rules for generals, specifically a council of war would judge them for surrendering without much if any fight.4 The council of war judged Dupont guilty and he was imprisoned until January of 1814. At that time he was released but put under surveillance by the police.

After Napoleon's abdication in April of 1814, General Dupont was named Minister of War by the provisional government and then King Louis XVIII. Dupont promptly set out with policies that would alienate and annoy all ranks, branches, and locations within the army. At the end of the year he was removed as Minister of War and instead was appointed governor of the 22nd military division and a Commander of Saint Louis. When Napoleon escaped from Elba in 1815 for the Hundred Days, Dupont tried to organize a resistance but was forced to flee. Once Napoleon resumed power, he again dismissed Dupont's ranks and titles. Dupont returned to Paris after Napoleon's second abdication and he later became a minister of state and politician.