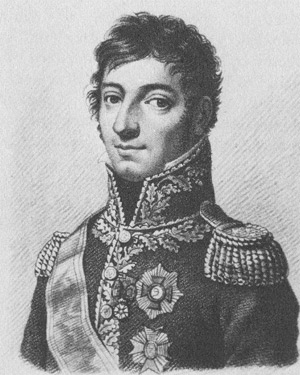 Cause of Death: Lost at sea

The son of a cloth merchant, Charles Lefebvre-Desnouettes was fairly intent on joining the army. Three times he ran away from school at Grassins and enlisted in an infantry regiment, and all three times his parents purchased his release from his enlistment. Finally, at the end of 1789 he became a chasseur with the National Guard of Paris, and this time his parents did not bring him back. In the summer of 1791 Lefebvre-Desnouettes quit the service, but the next year he joined the Legion of the Allobroges. By February of 1793 he was a sous-lieutenant in the 5th Dragoons and over the course of the following years he served in the Army of the North, the Army of the Sambre and Meuse, and the Army of the Rhine and Moselle. In 1797 Lefebvre-Desnouettes was promoted to lieutenant and then sent to the Army of Italy. The next year he was promoted to capitaine and then sent to Belgium to serve against the insurgents there.

In early 1800 Lefebvre-Desnouettes became an aide-de-camp to the First Consul, Napoleon Bonaparte. In this capacity he served at the Battle of Marengo and then he was promoted to chef d'escadrons. In the years of peace that followed Lefebvre-Desnouettes was assigned to the staff of the Consular Guard, an elite unit of gendarmerie, and finally the 18th Dragoons when he was promoted to chef de brigade at the end of 1802. The next few years he worked for General Soult in the camps along the coast and in 1804 he became an equerry to the emperor. In 1805 Lefebvre-Desnouettes served with the 4th Dragoon Division of the Cavalry Reserve and he served at Elchingen and Austerlitz. On Christmas Day he was made a Commander of the Legion of Honor.

In 1806 Lefebvre-Desnouettes married Louise Stéphanie Rollier, a cousin of Napoleon. That year he was also promoted to général de brigade and Napoleon gave him a house on Rue Chantereine. In November Lefebvre-Desnouettes was given command of a brigade of Bavarian cavalry and he also served as aide-de-camp to Jerome Bonaparte in IX Corps. Busy on the campaign, he took part in the blockade of Glogau, served at Kalisch and the siege of Breslau, and then seized Brieg. In April of 1807 Lefebvre-Desnouettes was victorious over General Kleist near Frankenstein, and he then went on to win at Canth and near Glatz. The Bavarians honored Lefebvre-Desnouettes by naming him a Commander of the Lion of Bavaria.

At the end of 1807, Lefebvre-Desnouettes passed to the service of Westphalia, being made a général de division of Westphalia and equerry of the crown of Westphalia. However, his service there was short-lived as he returned to France's service in January of 1808, being made the major-colonel of the Chasseurs à Cheval of the Imperial Guard. Rewarded as a Count of the Empire, Lefebvre-Desnouettes next became chief of staff to Marshal Bessières commanding the Corps of Observation of the Western Pyrenees. When they moved into Spain, in June he was victorious at Tudela, Mallen, Alagon, and Epila before taking part in the Siege of Saragossa. That August he was wounded in an assault at Saragossa and then he returned to France and received a promotion to général de division. After commanding the detachments of the Guard at Paris, in November he brought the chasseurs of the Imperial Guard back to Spain where they fought at Tudela and Somosierra .

The next month, General Lefebvre-Desnouettes was ordered with his chasseurs to attempt to catch the fleeing British at Benavente. Finding the bridge over the Elsa River destroyed, they searched for a ford and found one that they crossed with difficulty. Some cavalry scouts of the British saw them, and in response the French chasseurs chased them almost all the way to Benavente where they encountered a sizable British cavalry force. Skirmishing and charges ensued, and the French, clearly outnumbered and overextended, fell back to the ford to escape. Lefebvre-Desnouettes had been minorly wounded by a pistol shot, but worse for him, his horse had been wounded and after plunging into the water, refused to cross the ford. Unable to escape, he was quickly captured by Corporal Grisdale of the British 10th Hussars who would later run an inn named the General Lefebvre. Lefebvre-Desnouettes was taken to the British general, Sir John Moore, who treated him kindly, speaking to him in French and providing some of his own clothes for Lefebvre-Desnouettes to change into since he was drenched and bleeding. Sir John Moore then sent a messenger to the French, requesting Lefebvre-Desnouettes' baggage, which was promptly sent.1

Transported to England as a prisoner of war, Lefebvre-Desnouettes was well treated but spent the next few years in captivity. His wife was allowed to come to England to live with him, and she was instrumental in his escape back to France in May of 1812. Back in time for the Russian campaign, Napoleon had held the official position of commander of the Chasseurs à Cheval of the Imperial Guard vacant for him, awaiting his return. Leading his unit, Lefebvre-Desnouettes was wounded at Winkowo on the Russian campaign and he later returned to Paris with Napoleon.

In 1813 Lefebvre-Desnouettes was awarded a Grand Cross of the Order of the Reunion. Serving throughout the campaigns in Germany that year, he fought at Bautzen, Rimbourg, Mersebourg, Altenbourg, and Hanau before being given command of the cavalry of the Young Guard. In December of that year he besieged Brénda but was forced to lift the siege and fall back, rejoining the army in Champagne. During the defense of France of 1814, Lefebvre-Desnouettes was in the thick of the fighting, being wounded twice by bayonets to the left side at Brienne, and then serving at La Rothière, Montmirail , Château-Thierry, Vauchamps , and Arcis-Sur-Aube. After Napoleon's abdication, Lefebvre-Desnouettes commanded the escort of the Emperor that accompanied Napoleon to Roanne.

Under the Bourbons, Lefebvre-Desnouettes was well treated, being made a Knight of Saint Louis. However, as an ardent supporter of Napoleon, he conspired with others to assist Napoleon's return from Elba, and once he learned of Napoleon's departure he traveled with Lallemand to La Fère to seize the arsenal there. Unfortunately, the resistance of General d'Aboville there stopped them from taking the arsenal in support of Napoleon, and so he traveled to Compiègne to attempt to bring his regiment to Napoleon's side, which also failed.

Nevertheless, Lefebvre-Desnouettes was returned by Napoleon to his previous position, Colonel of the Chasseurs à Cheval of the Imperial Guard, and also made a Peer of France. For the upcoming campaign, he took command of a division of light cavalry of the Old Guard consisting of lancers and chasseurs. In June Lefebvre-Desnouettes led this unit into action at Fleurus on the 15th, Quatre-Bras on 16th, and Waterloo on the 18th, then fell back to the Loire with them after the defeat at Waterloo. Proscribed by the returning Bourbons, he fled to Alabama in the United States and was condemned to death in absentia and stripped of his Legion of Honor by a council of war in France for his actions in 1815. His wife worked tirelessly for his pardon and return to France, eventually securing permission for him to return to France but not Paris.2 In 1822 Lefebvre-Desnouettes set out to return to his homeland but booked his transatlantic voyage on the inauspiciously named ship Albion. The ship encountered a fierce storm near Kinsale, Ireland and was destroyed against the rocks, losing almost all aboard including Lefebvre-Desnouettes.