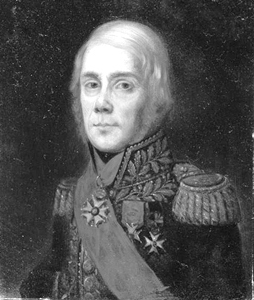 Artillery commander in Spain and son of General d'Aboville

The son of General François Marie d'Aboville, Augustin Gabriel d'Aboville entered the army in May of 1789 as a sous-lieutenant in the artillery regiment of Toul. Four months later he was enrolled in the artillery school of Châlons and he left there as a lieutenant in February of 1792. D'Aboville's first combat came soon when he served at Courtrai and he then became an aide-de-camp to his father in September of 1792. Two months later he was promoted to capitaine, and then in 1794 he joined the Army of the Sambre and Meuse. In 1795 he rejoined his father as an aide-de-camp and he remained in this position for the next few years. In 1799 d'Aboville joined the Army of the Danube and he served at Stockach that March. The next year he was promoted to chef de bataillon and he was named deputy director of the artillery at Mainz. In 1800 d'Aboville served with the Army of the Reserve at the crossing of the Great Saint Bernard pass and afterwards he served at the crossing of the Mincio, the crossing of the Adige, and then at the Siege of Verona.

In February of 1801 d'Aboville was named deputy director of artillery at Paris and then that May he was named to the central committee of artillery. In October he was named inspector of the manufacture of arms at Roanne and then in 1802 he returned to the position of deputy director of artillery at Paris. D'Aboville was next sent to Holland in 1803 where he was ordered to put Vlissingen and Zealand in a state of defense. Next he was named major in the 2nd Foot Artillery and and then at the end of 1804 he was named director of the artillery park of the Army of the North in Holland. D'Aboville received a promotion to colonel and in April of 1805 he took command of the 1st Foot Artillery. As the Grande Armée confronted the Third Coalition in 1805, d'Aboville served with the II Corps under General Marmont. In 1807 he joined the Army of Italy and he was named imperial commissary for the administration of powders and saltpeter.

After Napoleon's abdication, the restored Bourbons named d'Aboville a Knight of Saint Louis and commissary for the administration of powders and saltpeter. He did not take part in the Hundred Days of 1815 when Napoleon temporarily resumed power.