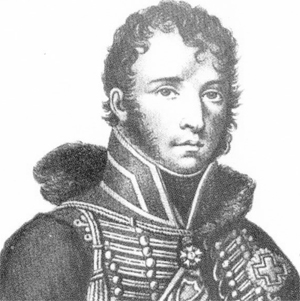 The son of a wig maker, François-Antoine Lallemand frequently went by the name Charles. In May of 1792 he volunteered to join the army and joined the 1st Company of Light Artillery formed at Strasbourg. He served at Valmy that September and then was sent to the Army of the Moselle where he served against Trier. In 1793 Lallemand transferred to the cavalry, joining the 1st Chasseurs à Cheval, and then in 1794 when the armies were reorganized he was assigned to the Army of the Sambre and Meuse. The following year he served as an aide-de-camp first to General Elie and then to General Loison in the 17th military division at Paris. Lallemand was still present at Paris on 13 Vendémiaire when a royalist mob threatened the government, and he served under General Bonaparte in stopping the uprising. Afterwards was promoted to sous-lieutenant.

Lallemand followed General Bonaparte to Italy in 1796 and took part in the campaigns there, eventually being appointed an aide-de-camp. In 1797 he fought at Rivoli and then in July he was promoted to lieutenant and assigned to the Guides à Cheval. 1798 saw Lallemand taking part in the expedition to Egypt, and the next year he was promoted to capitaine and became an aide-de-camp to Junot. Lallemand was sent to negotiate with English Admiral Sidney Smith during the campaign in Syria, but that eventually failed. Luckily for him, he was one of the select few chosen to return to France with Napoleon, and in 1800 he served on Napoleon's staff during the campaign in Italy.

During the years of peace that followed, Lallemand was promoted to chef d'escadrons and continued to serve as an aide-de-camp to Junot. In 1803 he was sent to on a mission to Saint-Domingue, and in 1804 he followed Junot to Portugal where Junot had been appointed ambassador.

In 1805 Lallemand was back in France and serving as a major in 18th Dragoons when war broke out. He took part in the campaign that fall and fought at Austerlitz. The next year he served against the Prussians and fought at Jena, and a month later he was promoted to colonel of the 27th Dragoons. In 1807 Lallemand was serving with La Houssaye's division when he fought at Friedland.

1808 saw Lallemand created a Baron of the Empire and sent to Spain with the 4th Dragoon Division. The next year he fell ill and returned to France to recover, but in 1810 he returned to the Spanish Peninsula. In June of 1811 Lallemand served under Latour-Maubourg at the combat of Elvas and then six weeks later he received a promotion to général de brigade. He was next appointed governor of Jaen but was still employed as a cavalry commander in the field. In June of 1812 Lallemand and his men fought broke the English cavalry at Valencia de Torres.

Lallemand was recalled to France in 1813 and then given command of the 1st Brigade of the 1st Division of I Cavalry Corps for the campaigns in Germany of that year. That June he took command of all the cavalry of Marshal Macdonald's XI Corps and then was appointed chief of staff of XI Corps. Two months later in August he took command of the light cavalry of Marshal Davout's XIII Corps, and with Davout he was bottled up in Hamburg for an extended siege. During the siege he commanded the Danish troops until Davout finally surrendered the city well after Napoleon's abdication. Returning to France, Lallemand was named a Knight of Saint Louis and given command of a subdivision of the 1st military division.

The next year when he learned of Napoleon's escape from Elba, Lallemand and Lefebvre-Desnouettes attempted to rally troops in support of Napoleon and seize the arsenal of La Fère. They were unsuccessful and Lallemand was arrested by the gendarme and conducted to Soissons, but once Napoleon took power in Paris Lallemand was released. Napoleon promoted Lallemand to lieutenant general and appointed him deputy commander of the Chasseurs à Cheval of the Imperial Guard. Lallemand went on to serve in the campaign that June and fought at Ligny before fighting at Waterloo where he was wounded. After Waterloo, Lallemand rejoined Napoleon in Paris and accompanied him to Rochefort, intending to accompany him further into exile. Lallemand went with Napoleon on board the Bellerophon before he was arrested at Plymouth and denied the opportunity to accompany Napoleon to St. Helena. Instead, he was sent to Malta where he was imprisoned.

During Lallemand's imprisonment, back in France he was tried in absentia and condemned to die. After he was released he traveled to Smyrna but then he was ordered to leave by the Sultan of Turkey. Lallemand went to Egypt and then the United States, where in 1817 he established a colony of French refugees in Texas known as the Champ d'Asile. Since the land was legally held by the Spanish government, Lallemand wrote to them asking permission to establish his colony, but he received no answer. Pressing on, he established the colony but while he was away on business a Mexican military force arrived at Champ d'Asile and forced the settlers to leave.1

After the failure of the colony, Lallemand returned to Europe. In 1823 the Spanish king appealed to other monarchs to restore his power that had been taken by a constitutional government based in Cadiz. King Louis XVIII sent a French army to intervene and Lallemand tried unsuccessfully to recruit a legion of French refugees to help defend the new Spanish government. Next Lallemand traveled to Brussels where he suffered hardship and then returned to the United States to settle in New York. In 1830, when Louis-Philippe took power, Lallemand was allowed to return to France.