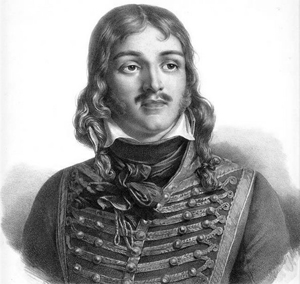 Talented general who participated in the storming of the Bastille, distinguished himself in the Vendée, and was mortally wounded at Altenkirchen

The son of a prosecutor, François Séverin Marceau-Desgraviers' military career began when he enlisted in the infantry regiment of Angoulême in 1785. He was on leave in Paris on July 14th, 1789 and when he saw the masses forming at the Bastille he joined in and took part in the storming of the Bastille. Later that same day Marceau joined the National Guard of Paris, and within a few months he had risen to become captain of the National Guard of Chartres. In 1791, Marceau became captain of the 2nd Company of the 1st Battalion of Volunteers of Eure-et-Loir. The next year he was promoted to lieutenant colonel and he served at the Siege of Verdun. After the loss of Verdun, Marceau requested to become a lieutenant of light cuirassiers of the German Legion, which was granted.

Since the garrison had surrendered on the condition that they not fight the First Coalition for a period of time, they were sent to fight the rebels in the Vendée. Throughout 1793 Marceau served in the Vendée and in May he became a capitaine in the 19th Chasseurs à Cheval. On June 10th he fought at Saumur where he rescued the representative of the people Bourbotte from being captured by the rebels. Marceau was promoted to chef de bataillon a few days later. After distinguishing himself at Luçon in August and Chantonnay in September, he received a promotion to général de brigade on the 16th of October, becoming a general at the young age of 24. The next day Marceau put this promotion to good use, contributing to the victory of Cholet. Less than a month later he received a promotion to général de division, and the week after that he fought at Antrain.

During this time Marceau had become good friends with General Kléber. At the end of November, Marceau was named interim commander-in-chief of the Army of the West, with the eventual command intended for General Turreau who was with the Army of the Eastern Pyrenees at the time. Marceau, recognizing Kléber's better experience, told Kléber, "I will take all the responsibility, but you shall really lead. All I ask is the command of the advance guard at the time of danger." Kléber agreed and told Marceau that if the worst happened, they would face the guillotine together.1 Marceau led the army and they were victorious at Mans when the defeated Vendéens began to flee to Laval. Chasing the rebels, the republican soldiers began to massacre their routed enemies and their camp followers. Marceau tried to stop the slaughter and personally intervened in one case, rescuing a woman and sending her to safety. However, she was discovered and put on trial where she admitted that Marceau had saved her. The poor woman was guillotined, and suspicion fell on Marceau, but the representative of the people Bourbotte who Marceau had saved only a few months earlier ensured Marceau's safety. Meanwhile Marceau and his men followed the rebel army and Turreau had arrived in the area. Turreau sent Marceau a message to stop chasing the rebel army until Turreau could take command, and Marceau replied, "Tomorrow at dawn I shall attack the enemy and destroy him. You had better make haste if you want to see the end of the war."2 Marceau went on to defeat the rebels at Savenay on December 23rd. Turreau arrived within a few days and assumed command and Marceau left the army due to poor health.

By this time Marceau had earned quite a reputation for himself. In addition to his military talents and honorable behavior, he was known for continuing to wear a green hussar's uniform that he had designed himself, and always wearing a miniature portrait of his fiancée around his neck.3 After recuperating at Rennes and later Paris, Marceau returned to active duty and took command of a new division in the Army of the Ardennes under Charbonnier in May of 1794. Over the next two months he was shifted to different commands and then at the Battle of Fleurus he commanded the extreme right but he was routed. After Fleurus, the army was reorganized and Marceau joined the Army of the Sambre and Meuse where he took command of the 9th division under Schérer. With this division he fought at the Ourthe in September and in October he fought at the Roer and seized Coblentz.

In April of 1795, General Marceau took part in the blockade of Mainz under Michaud. The latter half of 1795 was a busy year, as he commanded a division that besieged Ehrenbreitstein, recrossed the Rhine, supported the fighting at Neuwied, seized the gorges of Stromberg, was overwhelmed by the Austrians on December 7th, and then was victorious at Soultzbach. On the last day of the year, Marceau signed an armistice with the Austrian General Kray that lasted until May of 1796. During the campaign of 1796, he commanded the three divisions that made up the left wing of the Army of the Sambre and Meuse and he seized the fort at Koenigstein. As the army was forced to fall back, in September Marceau covered the retreat, fighting at Limburg and Freylingen. Stopping the enemy at Altenkirchen, he led valiantly until being struck in the left side by a carbine round, shot by a chasseur from the Tyrol.

Unable to move their mortally wounded general, the French left him to the Austrians at Altenkirchen. Archduke Charles found him and had his own surgeons attempt to save Marceau's life, but unfortunately they were not successful. Upon his death, the Austrians returned his body to the French, and at his funeral, as the French artillery fired in a salute to his memory, the Austrian artillery could be heard in the distance also firing in a salute. General Kléber, formerly an architect, designed a pyramid as a memorial to Marceau, and on the anniversary of Marceau's death Marceau's body was cremated and his ashes were placed in a marble box inside the pyramid. In 1889 Marceau's ashes were transported to the Pantheon in Paris.