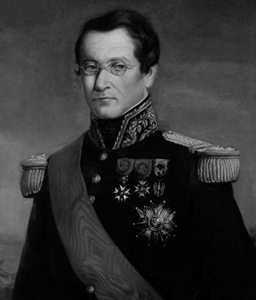 The son of a captain in the regiment of Picardy, Charles-Nicolas d'Anthouard de Vraincourt followed his father's footsteps and embarked on a military career, first becoming a gentleman cadet in the military school of Pont-à-Mousson in 1787. Two years later he was commissioned as a sous-lieutenant of artillery and in 1790 he was promoted to lieutenant in the artillery regiment of Besançon. In 1791 d'Anthouard served in the 4th Foot Artillery, and the following year he was sent to the Army of the South and promoted to capitaine. When the Army of the South was split apart, d'Anthouard joined the Army of the Alps. In 1793 he served in the 1st Foot Artillery and took part in the Siege of Lyon where he was wounded in the right thigh. Next d'Anthouard was sent to the Siege of Toulon where he served under a young Captain Bonaparte until the successful conclusion of the siege.

1798 saw d'Anthouard being assigned to to the Army of the Orient. He immediately saw action on the campaign, serving at Malta, Alexandria, and the Battle of the Pyramids . Two days after the Battle of the Pyramids, General Bonaparte promoted him to chef de bataillon in the 3rd Foot Artillery and named him director of artillery at Cairo. In 1799 d'Anthouard was named commander of the artillery of General Lannes' division and he took part in the expedition to Syria, serving at El Arisch, Jaffa, and then Acre where he was wounded. After that unsuccessful siege, he accompanied General Dommartin to Rosetta and was wounded by a shot to the right hand when they were attacked. Both officers survived the attack but Dommartin's wound became infected, leading to his death a few weeks later. Remaining in Egypt, d'Anthouard was promoted to chef de brigade in the artillery staff in July of 1800 and he was later named director of artillery at Alexandria. During the defense of Alexandria against the British in 1801, d'Anthouard was wounded by three separate balls, taking one to the head, one to the right leg, and one to the right wrist. After the surrender of the French in Egypt, he returned to France.

After returning to France, d'Anthouard de Vraincourt was named chef de brigade of the 1st Horse Artillery. In 1804 he was assigned to the Army of Italy and named commander of the artillery school of Plaisance. The next year d'Anthouard received a promotion to général de brigade and he became the lead aide-de-camp to Napoleon's stepson, Prince Eugene, the Viceroy of Italy. In 1806 he served in Dalmatia, and then in 1807 he was sent to the Grande Armée to take part in the Siege of Danzig . After that successful siege, d'Anthouard took part in the siege of Graudentz before returning to Italy.

In 1808 General d'Anthouard was named inspector of the troops of the Papal States. When Austria declared war in 1809, he served as aide-de-camp to Prince Eugene on the campaigns in Italy that year. General d'Anthouard fought at the Battle of Raab that June where he was wounded by a ball that smashed his left hand, but nevertheless he was fit to serve at the Battle of Wagram a month later. Rewards followed in 1810 when he was named a Count of the Empire and général de division, and in 1811 he was named commander-in-chief of the artillery in Italy.

For the Russian campaign of 1812, d'Anthouard continued to serve with Prince Eugene, this time taking command of the artillery of Eugene's IV Corps. Together they served at Ostrowno, Smolensk , and Borodino before taking part in the retreat. That November as the army fell back and fought sporadically d'Anthouard was badly wounded in the right thigh by a ball, and he was transported back to Thorn to recover from his wounds.

D'Anthouard was finally able to return to service in May of 1813 when he took command of the artillery of the Corps of Observation of the Adige. He then temporarily commanded the Illyrian provinces before taking command of the left wing of the Army of Italy. Recognized as a Commander of the Iron Crown, d'Anthouard continued to serve in Italy, attempting to recruit more soldiers to the army. In 1814 he served as governor of Parma and Plaisance until Napoleon's abdication and afterwards he returned to France.