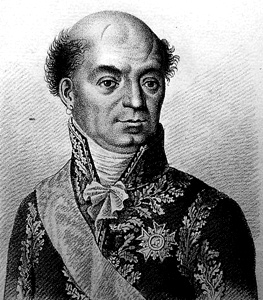 Of the minor nobility, Catherine-Dominique de Pérignon began his military career when he was commissioned as a sous-lieutenant in the Regiment of Lyonnais in 1780. Two years later he joined the Royal Grenadiers of Quercy and became an aide-de-camp to the Count de Preissac. Bored by the staff work and lack of action, he resigned in 1783 and returned home to Montech. In 1786 he married Hélène-Catherine de Grenier, the daughter of the mayor of Montech.

As the Revolution began in 1789, Pérignon became the lieutenant colonel of the National Guard of Montech. The next year he became a justice of the peace and then in 1791 he was elected to the Legislative Assembly as the sixth of twelve deputies of Haute-Garonne. Pérignon joined the military committee but then resigned in May of 1792, intent on serving in the army. That September he became a lieutenant colonel in the Legion of the Pyrenees and he began serving with the Army of the Eastern Pyrenees.

Pérginon first saw action at Truillas in July of 1793, and less than two weeks later he was promoted to chef de brigade. That September he was fighting and was wounded by a bayonet to the thigh and in recognition the representatives of the people promoted him to général de brigade. Three months later Pérignon was promoted to général de division and then in January of 1794 he was given command of a division.

Pérginon began to lead his division on the new offensive of 1794, serving at the camp of Boulou and blockading Bellegarde in May, and then in June he defeated the Spanish at Junquera. That November the commander-in-chief of the Army of the Eastern Pyrenees, General Dugommier, was killed at the Battle of Montagne Noire , and Pérignon was immediately placed in charge of the army. After winning there, he went on to fight at Escala and then take Figuières later that month. Next Pérignon laid siege to Roses, eventually taking it in February. In May of 1795 he was beaten at Bascara and then at the end of the month he was replaced by General Schérer.

General Pérignon was next designated commander-in-chief of the Army of the Coasts of Brest. Instead of taking up that command, he was elected to the Council of 500 as a deputy of Haute-Garonne. That October Pérignon was appointed ambassador to Spain and he helped negotiate the terms of the treaty between France and Spain. At the end of 1797 he returned to France and retired.

Pérignon was called out of retirement in October of 1798 and sent to the Army of Italy to try and help salvage the situation there. He took command of the troops stationed in Liguria, and then in August of 1799 he was designated the commander of the corps of the left wing. Fighting at Novi that month, Pérignon was badly wounded in the head, arm, and body before being taken prisoner. Held as a prisoner of war for over a year, he was finally returned to France at the end of the year 1800.

Pérignon was next made commander of the 10th military division at Toulouse, but in April of 1801 he became a senator. Due to his frequent work with the Spanish, in 1802 he was placed in charge of the committee defining the borders between France and Spain. The following year he became vice president of the Senate, and then in 1804 he was created a Marshal of the Empire. In 1805 Pérignon was awarded the Grand Eagle of the Legion of Honor, and the next year he became Governor General of Parma and Plaisance. Rewards continued to follow, for in 1808 he became a Count of the Empire and Grand Dignitary of the Order of Two Sicilies. Pérignon was also designated the Governor of Naples and answered to Murat but commanded the French army in Naples.

After Napoleon's abdication in 1814, Pérignon was made a Knight of Saint Louis and Peer of France by the returning Bourbons. When Napoleon escaped from exile in 1815 for the Hundred Days, Pérignon refused to serve him and instead retired to Montech. In response, Napoleon struck him from the list of marshals, but this was short-lived as the once again restored Bourbons reinstated this honor. As a Peer of France, Pérignon participated in the trial of Marshal Ney and voted for death.

Pérignon's children were active at the time too, with his oldest son being killed at Friedland, while three of his daughters married Napoleonic generals, namely General Lanusse, General Cavaignac, and General Rogniat.