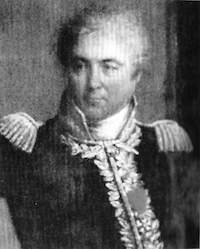 After enlisting in the army in the regiment of Auvergne in 1769, Jacques Antoine Chambarlhac de Laubespin was commissioned as a sous-lieutenant the following year. In 1776 he resigned and left the army, only returning after the onset of the French Revolution. In 1792 Chambarlhac was named lieutenant colonel of the 1st Battalion of Volunteers of Haute-Loire. In May of 1793 he was placed in charge of the 4th Battalion of Grenadiers in the Army of the Alps. Chambarlhac next seized the defenses of Mont Cenis and he was later promoted to chef de brigade, eventually commanding the 75th of the Line. In 1796 he served in the Army of Italy in Pijon's brigade and that April he was repulsed at Saint-Pierre d'Arena. In November Chambarlhac fought at the Battle of Arcola where General Bonaparte promoted him to général de brigade on the battlefield on the 15th. However, during the last day of the battle on the 17th he was grievously wounded. In January of 1797 Chambarlhac was named commander at Brescia and then the next month he took command of a brigade of Sérurier's division. That June he took command of the 14th Brigade in Victor's 8th Division and he remained in Italy until the end of 1799. In November of 1799 Chambarlhac was called to Paris for a mission. He was given command of the 17th military division and sent to Alençon to serve with the Army of the West. With the Army of the West, Chambarlhac seized Frotté and defeated the Chouans near Mortagne. Despite being only a général de brigade, he was next sent to the Army of the Reserve to command the 1st Division and in April his division became part of General Victor's corps. That June Chambarlhac fought at Montebello and only a few days later he and his troops were heavily engaged at the Battle of Marengo his troops were heavily engaged. Afterwards he held positions in Italy and then in November he was named commander of Mainz and the département of Mont-Tonnerre.

In 1802 Chambarlhac was sent to the 19th military division to command the département of Loire and in 1803 he was promoted to général de division. Later in 1803 he was named commander at Vannes and then in 1804 he was named a Commander of the Legion of Honor. In 1805 Chambalrhac took command of the 24th military division at Brussels and then in 1807 he served with the Corps of Observation of the Escaut. Two years later in 1809 he took command of the 3rd Division serving unger General Rampon in the Army of the North and then in 1810 he returned to the 24th military division at Brussels. Chambarlhac was named a Baron of the Empire in 1811 and three years later in 1814 he took command of an infantry column in the Army of the North. After Napoleon's abdication and the Bourbon Restoration, Chambarlhac was put on non-activity and named a Knight of Saint Louis. He was then offered a position commanding the département of Haute-Loire, but he refused. When Napoleon returned to power in 1815 for the Hundred Days, Napoleon offered Chambarlhac a position as commander of the 18th military division at Dijon, but Chambarlhac again refused a command. Chambarlhac retired later that year.