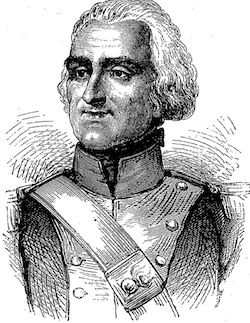 The "first grenadier of the Republic" who was killed in 1800

Théophile Malo Corret's father was a lawyer and his mother was descended from an illegitimate half brother of the Viscount of Turenne, Henri de La Tour d'Auvergne. In 1767 Corret was commissioned as a sous-lieutenant in the black musketeers and in 1780 he added to his name his illustrious, distant relative's name. Corret de La Tour d'Auvergne was promoted to capitaine in 1784.

In 1792 he served with the Army of the Alps and then in 1793 he served with the Army of the Western Pyrenees. With that army he commanded the companies of grenadiers known as the infernal column in the advance guard. Seeing action, Corret de La Tour d'Auvergne distinguished himself at Irun and Saint-Sébastien. Captured by a British frigate in March of 1795, he was released in January of 1796. In 1799 he served on the campaign in Switzerland as a simple volunteer and he was known for refusing numerous promotions in addition to his bravery and his modesty. On April 27, 1800, the First Consul Napoleon Bonaparte named Corret de La Tour d'Auvergne the "first grenadier of the Republic". Corret de La Tour d'Auvergne was killed in battle by a lance blow to the heart only two months later.