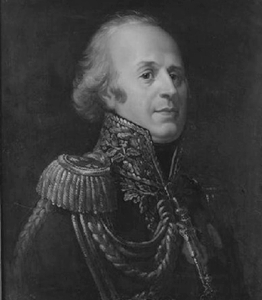 Born into the nobility, Louis-Marie-Jacques-Amalric de Narbonne-Lara entered the French military in 1771 as an artillery lieutenant. Over the following years he served with the gendarmes and the infantry and by the time of the Revolution he had risen to the rank of mestre de camp. Rewarded as a Knight of Saint Louis in 1789, Narbonne-Lara then became commander of the National Guard of Besançon in 1790. He next accompanied the aunts of King Louis XVI to Rome and then in September of 1791 he was promoted to maréchal de camp. That December Narbonne-Lara was appointed Minister of War but he only remained in the position for three months. In April of 1792 he joined the Army of the Center and the next month he was promoted to lieutenant general but he refused the promotion. That July Narbonne-Lara joined the Army of the North but then only a month later he emigrated from France with assistance from Madame de Stael. He traveled to England and then Switzerland, finally residing in Germany.

After Napoleon's general amnesty for those who had fled during the Revolution, Narbonne-Lara returned to France in the year 1800. He was reintegrated into the army as a général de division in 1801 but he was not actively employed. In 1809 Napoleon brought Narbonne-Lara onto the the general staff and during the Danube campaign that year he placed Narbonne-Lara as governor of Raab. Next Narbonne-Lara was sent to command the 4th Division of the Illyrian Provinces at Trieste. As a member of the old nobility and fluent in many languages, Narbonne-Lara was then employed as a diplomat. He was sent to Munich in 1810 and named a Count of the Empire. At the end of 1811 he officially became an aide-de-camp to Napoleon and he accompanied Napoleon on the campaign against Russia of 1812. In 1813 Narbonne-Lara was sent as ambassador to Vienna and he attended the conferences at Prague that June but he was unable to prevent Austria from joining the Sixth Coalition. That September he was named governor of Torgau and he died there of illness only a few months later.