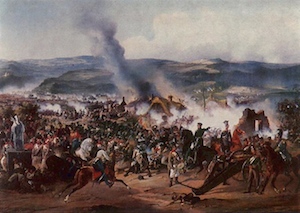 General Vandamme had been ordered to lead his corps of soldiers to cut the Allied line of retreat from the Battle of Dresden. As Vandamme's men advanced, they ran into 44,000 Russian troops under Count Ostermann-Tolstoi in their way at Kulm. A fierce fight ensued, but when Prussian General Kleist's corps accidentally arrived in Vandamme's rear, the French were unable to maintain the fight. Vandamme and nearly half of his command were captured and taken prisoner.