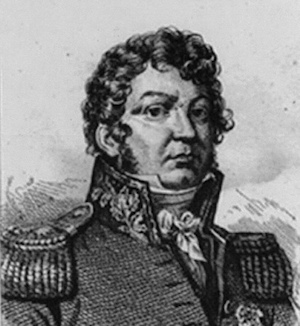 Head of Napoleon's topographical department, providing maps for the army on campaign

The son of the treasurer of the regiment of Toul, Louis-Albert Guislain Bacler d'Albe initially worked as a post office clerk before he embarked on a career as a painter. When France was threatened by foreign powers after the onset of the Revolution, Bacler d'Albe volunteered and joined the 2nd Battalion of Ariège in May of 1793. Sent to the Army of the Alps, he served at the Siege of Lyon and then raised a company of cannoniers and became its captain. Next Bacler d'Albe and his men were sent to the Siege of Toulon where he met the young Captain Bonaparte and was tasked to defend the the camp Invincibles. The next year Bacler d'Albe was sent to the Army of Italy where he was attached to the artillery park.1

In 1796 General Bonaparte took command of the Army of Italy to lead it on an audacious offensive against the Austrians in Italy. During the campaign Bacler d'Albe was noticed for his excellent ability to draw and thereafter he was attached to the staff as a geographical engineer. As a geographical engineer, he was responsible for obtaining and drawing the maps that would be used by the army. 1797 saw Bacler d'Albe promoted to chef de bataillon and named commander of the War Depot of the Cisalpine Republic. In late 1799 Napoleon returned from Egypt and seized power in a coup d'état and afterwards he employed Bacler d'Albe as chief of the geographical engineers in the War Depot. Bacler d'Albe was promoted to chef d'escadrons in 1801 and during the peaceful years that followed he was ordered to create a new map of Italy.

In 1804 Bacler d'Albe joined the staff of the Army of the Coasts of the Ocean and then was appointed chief of the topographical department of Napoleon's headquarters. When war broke out the following year, he accompanied Napoleon throughout the campaigns of 1805, 1806, and 1807. At times both Napoleon and Bacler d'Albe would climb upon a giant map table, crawling along to study positions and lost in thought until they accidentally banged heads their heads together.2 After the successful conclusion of the campaign in 1807, rewards followed for Bacler d'Albe for he was promoted to colonel one week after the Battle of Friedland and then in 1808 he was named a Knight of the Empire. That year he also accompanied Napoleon on campaign in Spain and then in 1809 he went along on the Danube campaign against Austria. In December of 1809 Bacler d'Albe was further rewarded as a Baron of the Empire.

Bacler d'Albe continued to lead the topographical department and when the Grande Armée campaigned in Russia in 1812 he served alongside Napoleon again. After surviving the retreat from Russia, in April of 1813 he was named an Officer of the Legion of Honor. Bacler d'Albe served throughout the campaigns in Germany that year and he received a promotion to général de brigade in October. The next year he continued to provide maps to Napoleon until March of 1814 when he was named director of the War Depot. After Napoleon's abdication, the restored Bourbons named him a Knight of Saint Louis and kept him in his position at the War Depot. Napoleon returned from exile in 1815 and resumed power for the Hundred Days, keeping Bacler d'Albe employed as director of the War Depot. After Napoleon's second abdication Bacler d'Albe was put on non-activity.