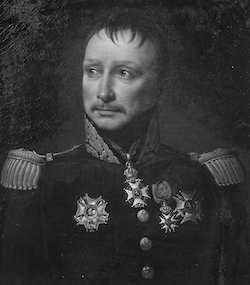 When the Grande Armée marched to war in late August of 1805, Gentil de Saint-Alphonse served with Marshal Bernadotte's I Corps. In March of 1806 he became an aide-de-camp to Bernadotte. Continuing to serve, in early 1807 Gentil de Saint-Alphonse was wounded by a shot at Mohrungen and then he was promoted to capitaine a few weeks later. He served in Germany in 1809 and in 1810 he was promoted to chef d'escadrons. In 1811 Gentil de Saint-Alphonse joined the staff of Marshal Murat the King of Naples before joining the 6th Hussars in Italy. For the 1812 campaign against Russia, he served as chief of staff of the 2nd Light Cavalry Division in II Cavalry Corps.