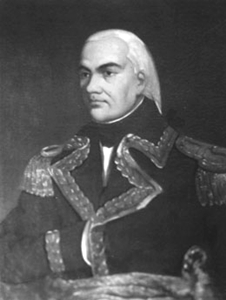 Originally an officer in the Spanish colonial armies, Francisco de Miranda first served with the French during the American Revolutionary War where he temporarily served as a brigadier general under General Rochambeau. After his experience with the Spanish armies, Miranda began to conspire for the independence of his homeland of Venezuela from Spanish rule. He traveled to London in 1784 before then traveling across Europe searching for support of his ideas.

In 1791 Miranda returned to France in the midst of the French Revolution and he befriended the politicians Brissot and Pétion. With his connections and military background, in August of 1792 Miranda was appointed a général de brigade in the Army of the Ardennes, serving under General Dumouriez. In this position he took part in the retreat of Grandpré and then the Battle of Valmy in September. Only a few weeks later he was promoted to lieutenant general and then he joined the Army of Belgium and in November he took the citadel of Antwerp. In 1793 Miranda briefly commanded the Army of the North, serving under General Valence, when Dumouriez was absent from the army and back in Paris. That February he laid siege to Maestricht and then in March he was beaten before Aix-la-Chapelle. Upon Dumouriez's return Miranda served as deputy commander of the Army of the North and he was given command of the left wing of the army. At the Battle of Neerwinden in March Miranda's wing was routed which significantly contributed to the French defeat. Afterwards he was ordered arrested and he left the army to return to Paris. In the meantime Dumouriez defected to the Austrians, while Miranda was brought before the revolutionary tribunal in May but acquitted. Despite his freedom, Miranda was not employed again by the army. Only two months later in July he was arrested at Belleville and the imprisoned at the prison of Luxembourg by order of the Committee of Public Safety.

Miranda survived the Reign of Terror but he was not released from prison until January of 1795. However, controversy followed him for he seemed to have become a royalist. In October of 1795 he was accused of being involved in the royalist insurrection of 13 Vendémiaire, the attack on the government by a mob that was put down by General Bonaparte's famous "whiff of grapeshot". Miranda was ordered arrested but he went into hiding and wrote the Council of 500 who then passed on his letters to the Directory. It was decided that the judge of the peace of the Tuileries would review his case, and Miranda was then arrested and released. However, the Directory ordered Miranda to be exiled in December of 1795, but he instead continued to hide and stayed in Paris. Two years later the royalists were close to gaining power and the Directory responded with the coup of 18 Fructidor to exile royalists. Miranda was designated as one of the many royalists to be deported, but he instead went into hiding again and made his way to England. He hoped to gain British support but did not find as much support from them as he desired. Despite his previous misfortunes in France, he returned to France in 1800 and was in Paris around the time of the attempted assassination of Napoleon by a bomb on Christmas Eve of 1800. Miranda was arrested as a possible accomplice but then released. He next traveled to Holland where he remained until 1803 when he returned to Paris. By 1804 Napoleon had had enough of Miranda and expelled him from France, and therefore Miranda returned to London.

Still intent on liberating Venezuela, Miranda tried and failed to gain much support from the British, so he returned to the United States in 1806. Later that year he formed a small expedition to attempt a landing in Venezuela to inspire the people to rise against their Spanish rulers. Alongside Miranda was a young aide Simón Bolívar but the expedition failed and Miranda was forced to take refuge at Curaçao. In 1808 Napoleon placed his brother Joseph on the throne of Spain and a few years later Venezuela declared itself free of Spanish rule. At this time Miranda returned to Venezuela to take part in a new government. However, much like other revolutions of the time, the country was far from united, with republican supporters vying for power against royalist supporters. As the royalist and Spanish troops gain success, the republicans surrendered and Miranda was arrested by the Spanish. He was sent to Cadiz where he was held in a dungeon of the inquisition. Miranda attempted to escape but instead he died of apoplexy in prison four years later.