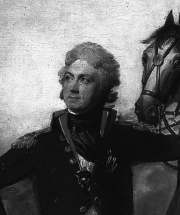 Noble officer who served during the American Revolution, emigrated to the United States, and then served in Saint-Domingue

Born into the nobility, Louis-Marie d'Ayen de Noailles was the second son of a Marshal of France, the Duke of Mouchy. At his birth he was given the title of Knight of Arpajon which he retained until 1775 when he became the Viscount of Noailles. Initially he served with the Noailles Cavalry Regiment, and in 1779 he was promoted to mestre de camp.

In 1779 Noailles joined the Colonel General of Hussars Regiment and followed his brother-in-law Lafayette to take part in the American Revolutionary War. Noailles distinguished himself at the action of Grenada on July 4th, 1779, and then in the attack to take Savannah from the British. In 1780 he was made a Knight of Saint Louis and he took a command with the 2nd Soissonnais Infantry. The following year Noailles served under General Rochambeau during the Siege of Yorktown and he organized the conditions of the British surrender there. With the American Revolutionary War concluded, he returned to France where he joined the King's Dragoons Regiment.

As France faced economic uncertainty in 1789, Noailles was elected to the Estates-General as the sole deputy of the nobility of the area of Nemours. He joined the military committee, and on August 4th he was one of the authors of the decree that abolished feudalism. In February of 1791 Noailles became the president of the Constitutional Assembly, and that November he became a maréchal de camp and was employed in the 2nd military division. Sent to the Army of the North, Noailles entered Valenciennes and Quesnoy, but he then resigned in May, claiming the army was too undisciplined. He immediately emigrated to England, and then in 1793 he moved to the United States to live in Philadelphia.

After Napoleon's general amnesty for those who had fled the Revolution, Noailles did not return to France. Instead, in 1802 he traveled to Saint-Domingue, where General Rochambeau, the son of his former commander during the American Revolution, gave him a position on the general staff. Noailles became the commander at the port of Môle Saint-Nicolas, and he was still commanding there when Rochambeau surrendered at Cap Français. Ordered to surrender by the British, Noailles refused and during the night he and his soldiers embarked on seven ships and attempted to slip past the British ships.

Noailles and the men on his ship, the schooner Coursier, hoped to reach Havana. By January 1st they had almost reached their destination and were in sight of the coast of Cuba when they saw the British corvette Hazard. Hoping to trick their enemies, they raised the British flag but the men of the Hazard were not fooled. That night Noailles decided to try and take the enemy ship. In the darkness they closed the distance between the ships and Noailles led thirty grenadiers to board the Hazard. During the bloody fight, the French grenadiers successfully took the British ship, but Noailles was badly wounded. The French continued on with their new prize to Havana, where Noailles succumbed to his wounds a week later.