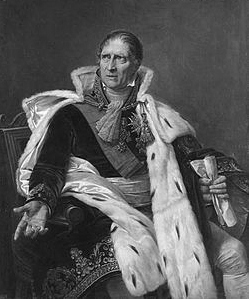 Chief commissary of the Army of Italy in 1796

Of noble birth, Jacques-Pierre Orillard de Villemanzy had a long career as a commissary for the French army. His first notable work as a commissary of war came when he served with the French contingent in America during the American Revolutionary War. Years later when the wars of the French Revolution began in 1792, Villemanzy was named a commissary to the Army of the Rhine. The next year at the end of 1793 Villemanzy was growing greatly concerned about the direction of the Revolution and allowed himself to be captured by the enemy. In 1796, two years after the Thermidorian Reaction and the end of the Reign of Terror, Villemanzy was exchanged and released. Immediately he was appointed chief commissary to the Army of Italy commanded by General Napoleon Bonaparte and he helped to keep the army paid and supplied during the campaign.

Having impressed General Bonaparte, Villemanzy was appointed inspector general of reviews and a général de division after Napoleon seized power in November of 1799. Villemanzy continued to serve as a commissary, and he took part in the campaigns of 1806 through 1809 in this capacity. After peace was signed with the Austrians in 1809, Napoleon named Villemanzy Intendant General of the Army of Germany. However, due to Villemanzy's age, he requested a leave and therefore Napoleon appointed him a Senator. Over the following years Villemanzy was created a Baron and then a Count of the Empire. After Napoleon's abdication in 1814 and the restoration of the Bourbons, King Louis XVIII named Villemanzy a Peer of France.

At the trial of Marshal Ney in 1815, Villemanzy voted for death.1