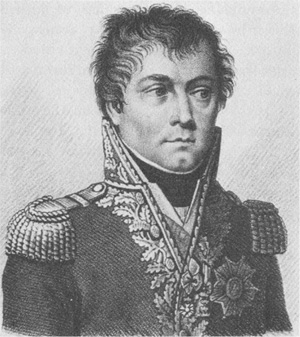 Multilingual general of engineers and notable ambassador to London, Vienna, and Constantinople

Antoine-François Andreossy was a versatile officer, best known for participation in the campaigns of Italy and Egypt and his diplomatic work. Andreossy's military career began when he was commissioned as a lieutenant in the Artillery regiment of Auxonne in 1781. Six years later in 1787 he was serving in Holland when he was taken prisoner by the Prussians, but he was exchanged before long. The next year he was promoted to capitaine.

With the arrival of the Revolution, in 1792 and 1793 Captain Andreossy served with the Army of the Moselle. 1794 saw him joining the Army of Italy where he became director of the artillery park of the advance guard. The next year he received a promotion to chef de bataillon. In 1796 when General Bonaparte assumed command of the Army of Italy, Andreossy was selected to be the deputy director of the bridging train. He served at the crossing of the Po River on May 7th, and then at the start of June he became director of the bridging train. With the French laying siege to Mantua, in July Bonaparte specifically selected Andreossy to command five gunboats to make a diversionary attack against Mantua while other units attacked. Andreossy then returned to the bridging train, and in November laid a bridge over the Adige at Ronco, helping to set up the Battle of Arcola . For his successful work, he was promoted to chef de brigade that December. In 1797 Andreossy served at the crossing of the Isonzo and at the action of Gradisca, and at the end of the year he was promoted to général de brigade.

Andreossy was designated for the Army of the Orient and once again he was made director of the bridging train. In July of 1798 he also commanded the troops of the flotilla on the Nile, and he distinguished himself fighting at Chébreiss. Next he was ordered to explore Lake Menzaleh with a flotilla, and then in September he fought at El-Schouara. In February of 1799 he became an assistant to the chief of staff General Berthier. When Napoleon decided to return to France, Andreossy was one of the select few chosen to accompany him.

Back in France, Andreossy was promoted to général de division in early 1800. He next took command of the artillery at Strasbourg, later the artillery at Mainz, and then became inspector general of artillery. In 1803 Andreossy was sent as ambassador to England, but he was recalled in August of 1805 when war broke out again. His next diplomatic role came in November of 1806 when he became ambassador to Austria. In 1809 he was made a Count of the Empire, and later he became Governor of Vienna when the French army arrived during the Danube campaign that year. A few months later he received the Grand Eagle of the Legion of Honor.

In 1810 Andreossy became a member of the Council of State and became president of the war department. He continued in that role until 1812 when he was named ambassador to the Ottoman Empire. After Napoleon's abdication in 1814, Andreossy was recalled to France but he was also named a Knight of Saint Louis. When Napoleon returned for the Hundred Days, he named Andreossy a Peer of France and gave him command of the 1st military division. After the French loss at Waterloo, Andreossy was sent to negotiate with Wellington, probably due to his fluent English.

In later years Andreossy was involved with politics and published numerous scientific papers.