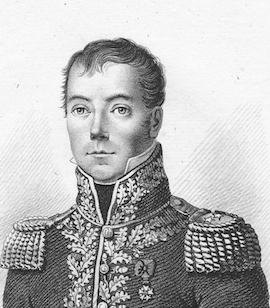 The son of a hatter, Jean Pierre Béchaud enlisted in the regiment of Dauphiné in June of 1787. After the Revolution was underway, in 1790 and 1791 he served against the insurgents of Comtat Venaissin and in the south. In 1792 Béchaud obtained a leave and joined the National Guard of Belfort. The next year he received three successive promotions, first to lieutenant in August, then to capitaine in September, and finally chef de bataillon in October. Serving with the Army of the Rhine, Béchaud was promoted to lieutenant colonel by the representatives of the people with the army in 1794. In 1796 he joined the 19th of the Line and in 1797 he served with the Army of England. In August of 1798 Béchaud took command of the force stationed in the département of Maine-et-Loire and he remained in this position until February of 1799. At that time he was then sent to the Army of Italy where he was named commander of the Sforza Castle at Milan. Béchaud was besieged by enemy troops and he was forced to surrender on May 23rd. Sent back to France, he was brought before a military commission to report on his surrender of the castle. Béchaud was declared non-culpable for the surrender and he returned to the Army of Italy.

In 1802 Béchaud was ordered to organize a foreign battalion at Cremona. He took command of this battalion and was then sent to Saint-Domingue. In December of 1803 after the French rule collapsed Béchaud returned to France with wounded soldiers. Back in France he first became commander of the depot of colonies at Bordeaux and then he joined the 66th of the Line. In 1805 Béchaud was appointed major of the 66th of the Line.

In 1808 Béchaud and his unit were sent to Spain and at the end of the year he was promoted to colonel in second of the 66th of the Line. The following March he was named colonel of the 66th of the Line. Béchaud continued to serve in Spain throughout 1809 and in July of 1810 he was badly wounded at the bridge of Coa. A month later Béchaud was named a Commander of the Legion of Honor and then in September of 1810 he fought at the Battle of Bussaco where he was hit in the chest by a ball. In 1811 he was named a Baron of the Empire and in 1812 he served under General Souham and fought at the combat of Villamuriel. Béchaud received a promotion to général de brigade in January of 1813 and that June he was assigned to the Corps of Observation of Mainz but instead he remained in Spain. In July of 1813 he took command of the 1st Brigade of Taupin's 8th Division in the Army of the Pyrenees and he served at the combat of Sourauren. In October Béchaud served on the Bidassoa where he was badly wounded. As the war moved to French soil, Béchaud fought at the Battle of Orthez in February of 1814. He was killed during the battle at Saint-Boues.