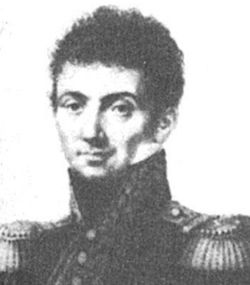 Joining the army at age eighteen, Joseph Christiani enlisted in the infantry regiment of Boulonnois in August of 1790. Over the next few years he served with the Army of the Alps and then in August of 1793 he became a sergeant major in the 4th Battalion of Mont Blanc. In 1794 Christiani was assigned to the Army of the Eastern Pyrenees and that December he was promoted to sous-lieutenant. Once peace was obtained with Spain in 1795, he was next sent to the Army of Italy where he served for a number of years. Christiani served throughout the campaigns of 1796 and 1797 and then he continued to serve in the Army of Rome and the Army of Naples in 1798 and 1799. In June of 1799 he fought at the Battle of the Trebbia where he was wounded by a shot to the left thigh and taken prisoner. A month later Christiani was released on parole.

During the Consulate, Christiani was assigned to the Army of Holland in 1803. In 1804 he received a promotion to chef de bataillon and after the campaign began in 1805 he served in the Grande Armée. In 1806 Christiani was placed with the Army of Dalmatia and he remained there until 1809 when he was transferred to the Army of Germany as a major in the 57th of the Line. During the Danube campaign of 1809, in June he was promoted to colonel of the 18th Light. After the conclusion of that campaign, Christiani joined the Grenadiers à Pied of the Imperial Guard as a major. Another reward followed when in 1810 he was named a Baron of the Empire.

In 1811 Christiani was named the commander of the school of fusiliers, tirailleurs and voltigeurs of the Imperial Guard at Fontainebleau. He remained in this position until 1813 when he resumed an active command, taking command of the 2nd Grenadiers à Pied of the Imperial Guard. Serving during the campaigns in Germany, Christiani and his men served under General Michel and that August he received a promotion to général de brigade. For the defense of France of 1814, Christiani commanded the brigade of fusiliers and velites at Bar-sur-Aube in January. After General Michel was wounded, Christiani took command of the 2nd Division of the Old Guard and he led them into action at Château-Thierry in February. Two days later they fought at Vauchamps and then at the end of the month they fought at Gué a Tresmes. Continuing to see action, in March Christiani and his men fought at Lâon, Fère-Champenoise, Sézanne, La Ferté-Gaucher, and then at Paris.

After Napoleon's abdication in April of 1814, Christiani was retained in a Guard position as a major in the Royal Grenadiers of France. However, when in 1815 Napoleon resumed power for the Hundred Days, Christiani rallied to him and was named major colonel of the 2nd Grenadiers à Pied again. Christiani served in this position during the short campaign in Belgium that June and he fought at the Battle of Waterloo. Afterwards, he was put on non-activity.