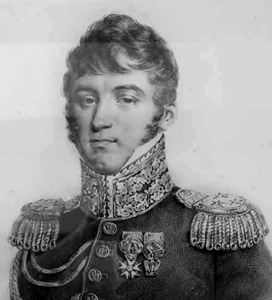 General of the Old Guard who was killed at Waterloo

The son of a surgeon, Claude-Etienne Michel volunteered in October of 1791 and joined the 6th Battalion of Volunteers of Jura. In 1792 he joined the Army of the Rhine and over the course of the year he received three promotions, to sous-lieutenant, lieutenant, and capitaine. In March of 1793 Michel fought at Rhein-Durckheim where he was taken prisoner by the Prussians. Captain Michel was held as a prisoner of war for more than two years and finally exchanged in June of 1795. Once back in France, he joined the advance guard of the Army of the Sambre and Meuse and before long he was promoted to chef de bataillon. Michel was next assigned to the Army of the Rhine in 1796 and then the Army of Germany in 1797. In 1798 he took part in the expedition to Ireland and was aboard the frigate La Furie when he was taken prisoner by the British. Exchanged at the end of the year, Michel was then sent to the Army of Holland for a few years. He fought at Egmont op Zee in 1799 where his right arm was broken by a shot, and he took a shot to the other arm at Nuremberg in 1800.

During the Consulate, Michel was selected to participate in the expedition to Saint-Domingue under General Leclerc. He returned to France in 1803 and then joined the 40th of the Line. Staying with this regiment, he took part in the campaign of 1805 and fought at the Battle of Austerlitz. After Austerlitz, Michel was promoted to colonel of the 40th of the Line. 1806 saw Michel joining the Grenadiers à Pied of the Imperial Guard as a major and marrying the niece of the Secretary of State, Hugues-Bernard Maret. Despite his new position in the Imperial Guard, Michel continued to participate in combat, fighting at Jena, Eylau, and Friedland.

In 1808 Michel was made a Baron of the Empire and sent to Spain where he served at Burgos. With the Austrians again menacing France and her allies in 1809, Michel returned to Germany as part of Dorsenne's division and he fought at Eckmühl, Aspern-Essling , and Wagram . Michel was promoted to général de brigade in 1811 and then in 1812 he served in the 3rd Division of the Old Guard during the campaign in Russia.

Michel continued to serve with the Old Guard during the campaign in Saxony in 1813 and during that time he was recognized as a Commander of the Legion of Honor. He took part in the defense of France in 1814, and that January he fought at Bar-sur-Aube. The next month he seized Maisons-Blanches and Saint-Thiébault, then had his right arm shattered by a shot at Montmirail . Due to this wound, Michel was authorized to return to Paris where he was made a Count of the Empire. In the meantime, despite not being fully recovered, he took command of a division of conscripts at Paris. On March 30th he took part in the defense of Paris where he was wounded by grapeshot to the kidneys.

After Napoleon's abdication, General Michel was retained by the Bourbons, being made a Knight of Saint Louis and placed with the royal guard. When Napoleon escaped from Elba in 1815 and resumed power for the Hundred Days, Michel rallied to him and was given command of the 1st Chasseurs à Pied of the Imperial Guard. Taking part in the campaign in Belgium, Michel fought at the Battle of Waterloo where he said the famous words sometimes incorrectly attributed to Cambronne, "The Guard dies, it does not surrender."1 True to his word, Michel fought and was killed by a shot to the stomach before the battle was over.