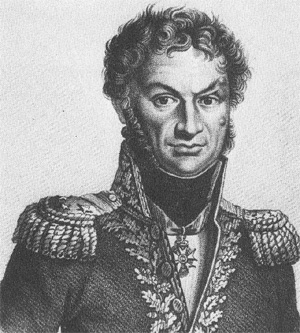 Initially intending to become a merchant, after the arrival of the Revolution Pierre-Jacques-Etienne Cambronne instead joined the army as a volunteer in the 1st Battalion of Loire-Inférieure in 1791. The following year he transferred to the 1st Battalion of Mayenne-et-Loire and served in the Army of the North. In 1793 Cambronne joined the Army of the North before serving with the Army of the Coasts of Brest. Serving against the rebels, that June he saved a caisson that had been abandoned and then in September he was promoted to lieutenant. 1794 turned out to be a difficult year for Cambronne when he was accused by an agent of the government of having insulted the agent in coarse terms and menaced him. Nevertheless Cambronne remained with the army and in October he was promoted to capitaine.

During the years of peace that followed, Cambronne served in garrison at Dunkirk until 1804 when he joined the Army of the Coasts and was named a Knight of the Legion of Honor. When war broke out in 1805, Cambronne was promoted to chef de bataillon in the 88th of the Line and he served in the Grande Armée on the campaign that year. After the Prussians declared war in 1806, Cambronne continued to serve in the Grande Armée and he distinguished himself at the Battle of Jena. A few months later he was recognized as an Officer of the Legion of Honor.

After surviving the retreat from Russia, in 1813 Cambronne continued to serve in the Imperial Guard and in April he was named a Commander of the Legion of Honor. In September he joined the 2nd Chasseurs à Pied of the Guard and then in October he fought at Hanau. One month later Cambronne was promoted to général de brigade commanding the 1st Chasseurs à Pied of the Guard. For the defense of France of 1814, Cambronne served in the Old Guard. That February he fought at Bar-sur-Aube where he was wounded by a shot to the thigh, and then in March he fought at Craonne where he was wounded multiple times. Continuing to fight despite his wounds, at the end of March Cambronne served at the defense of Paris where he was again wounded.

When Napoleon abdicated from the throne in 1814, Cambronne took command of the guard battalion that followed Napoleon into exile on Elba. In 1815 he returned with Napoleon and the battalion to France to reclaim the throne for the Hundred Days. Napoleon rewarded Cambronne by naming him a Grand Officer of the Legion of Honor and promoting him to lieutenant general, but Cambronne refused the promotion. Cambronne was then appointed major colonel of the 1st Chasseurs à Pied of the Imperial Guard and then further rewarded as a Count of the Empire and a Peer of France.

Taking part in the campaign that June, Cambronne led his men into action at the Battle of Waterloo. Towards the end of the battle, he was wounded by a shot to the left eyebrow as he stood in the midst of one of his battalion's squares. As the British asked for his surrender, Cambronne replied, "Merde!" which became the known as "le mot de Cambronne", or "the word of Cambronne."1 Some sources have suggested he stated, "The Guard dies but does not surrender", but those words were most likely said by General Michel who did die at Waterloo.

Taken prisoner by the British, Cambronne sent a letter to King Louis XVIII requesting to return to France but he did not receive a response. Instead he was listed in the ordinance of July of 1815 and struck from the army. Nevertheless Cambronne returned to France in December of 1815 where he was promptly arrested and thrown into prison at l'Abbaye. He was tried and condemned to die in absentia, not even allowed to be present at his own trial. However, the lawyer Berryer took up Cambronne's cause and successfully defended him, leading to his acquittal and release in 1816.