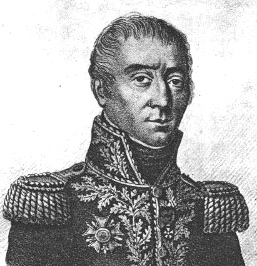 Claude-Sylvestre Colaud was the son of a trader from Briançon who lived in Corsica for much of his childhood. While studying in school at La Ciotat, at age seventeen he enlisted in the army in the legion of Lorraine. Sometime in the next few years he purchased permission to leave the army but then in 1777 he re-enlisted as a dragoon. Eleven years later Colaud was promoted to sous-lieutenant in the regiment of chasseurs of Alsace.

In early 1795 Colaud was placed with the Army of Italy before being named commander of Toulon in April. While in Toulon, he successfully disarmed the rebels who had seized the arsenal of the city. That June he took command of the 2nd Division of the Army of the Sambre and Meuse, and then the next year he and his division served in the left wing of the army under General Klèber. During the summer of 1796 Colaud fought at Altenkirchen and Uckerath, won at Friedberg, Wurtzbourg, Forchheim, and Sulzbach, and then was defeated at Amberg. That October he commanded the département of Deux-Nèthes before rejoining the Army of the Sambre and Meuse in February of 1797.

General Colaud's next major assignment came in October of 1798, when he joined the Army of Mainz and took command of the nine départements of Belgium. While serving there, he defeated the Belgian rebels and took fourteen of their flags. In 1799 he served with the Army of the Danube before joining the Army of the Rhine, eventually commanding a division in that army. In 1800 he commanded the cavalry of the reserve of Sainte-Suzanne's corps.

Colaud left the army in 1801 to serve as a senator. In 1804 he became a Grand Officer of the Legion of Honor, and in 1805 he returned to the army to command the two divisions at Antwerp. In 1806 he returned to the senate, and then in 1807 he took command of some troops of the National Guard at Lille. 1808 saw Colaud return to the senate again and also become a Count of the Empire. In 1809 he was briefly employed in the Army of Germany before becoming Governor of Antwerp and then being recalled to the senate. By this time he began to oppose Napoleon, leading some of the opposition of the senate. He was one of the first to vote against Napoleon in 1814.

For having gone against Napoleon, the restored Bourbons named Colaud a Peer of France and Knight of Saint Louis in 1814. Colaud did not take part in the Hundred Days, and afterwards during the trial of Marshal Ney he voted against death and for deportation of Ney.