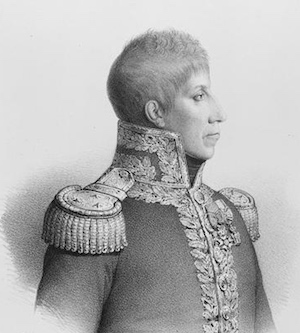 A career soldier, Claude Dallemagne volunteered to serve in the French infantry regiment of Hainaut in 1773. In 1778 he began serving with the French troops sent to the American Revolutionary War and the following year he received a promotion to sergeant. Dallemagne went on to serve at Saint Lucia where he was wounded by a shot to the right knee and then later he served at the Siege of Savannah. He remained with the French army in America until the war was concluded in 1783.

Dallemagne was still in the army when the French Revolution arrived in 1789, and the following year he took part in the repression of the insurrection of Nancy. In 1791 he was commissioned as a sous-lieutenant of grenadiers. Promotions came quickly soon thereafter for Dallemagne, for he was named a Knight of Saint Louis and promoted to lieutenant in June of 1792. Only three months later he was promoted to capitaine of grenadiers. In 1793 Dallemagne was sent to the Siege of Toulon where he took command of the grenadiers, and after the successful conclusion of the siege he was promoted to général de brigade in the Army of the Eastern Pyrenees. Instead of joining the the Army of the Eastern Pyrenees, he went to the Army of Italy where he was promoted to chef de bataillon by the representatives of the people with the army, apparently in conflict with his previous promotion and orders. While serving with the Army of Italy, Dallemagne was wounded three times and in April of 1794 the orders were sorted out and he was retained as a général de brigade. He went on to serve at Saorgio in 1794 and then defend the pass of Tende in 1795.

After General Bonaparte arrived in 1796 to take command of the Army of Italy, Dallemagne was placed in charge of the advance guard of grenadiers and carabiniers. That May he served at Fombio and Lodi , and then in June he served at the siege of Mantua and the action of Saint-Georges. Continuing to fight, in July Dallemagne led the troops in repulsing a sortie from the garrison of Mantua and two days later he successfully seized the camp of Migliaretto on the outskirts of Mantua. For this feat he received a sabre of honor. At the end of July Dallemagne and his troops were detached and then won at Lonato, and then in August they seized Gavardo. Next he was ordered to take command of Sauret's division and then promoted to général de division. Dallemagne then joined Vaubois' division and won at Borgoforte, and then in September he fought at Lavis and Roveredo before returning to the forces besieging Mantua.

Dallemagne's next assignment came in February of 1797 when he was ordered to Legnago to organize a new division. He was then named commander at Bologne where he remained for the next few months. In February of 1798 Dallemagne was given command of a division of the Army of Rome and then he temporarily took command of that army as it began to revolt against its leaders. That August he was assigned to the Army of Mainz where he took command of a division, and then in January of 1799 he received the surrender of Ehrenbreistein.

Dallemagne next requested to be relieved from command and then he embarked on a political career. In 1802 he became a deputy of Ain to the Corps Législatif and officially retired from the army. Nevertheless, he received awards in the following years, becoming a Commander of the Legion of Honor in 1804 and a Knight of the Iron Crown in 1807. In 1807 Dallemagne was recalled to activity and he served under Marshal Brune in Pomerania. Two years later he commanded the 25th military division at Wesel and then in 1810 he was named commander of the 14th military division at Caen. That year Dallemagne also retired from the army once again, and then in 1813 he was elected a deputy of Ain to the Corps Législatif again. He was named a Baron of the Empire in the week before his death.