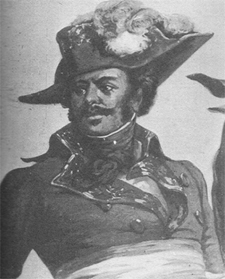 The son of the Marquis Alexandre Davy de la Pailleterie and a black slave woman in Saint-Domingue, Thomas Alexandre Davy Dumas would rise to become a general during the French Revolution and would later father the famous author, Alexandre Dumas. Thomas Alexandre Davy's father brought him back to France as a young child, and he grew up as a noble's son despite the illegitimacy of his birth.

Dumas, known for his height and extraordinary strength, entered the army in the Queen's Dragoons in 1786. Once the Revolution began, he changed his name to his mother's name, Dumas, to help avoid suspicion as a noble. Sent to the Army of the North, Dumas was promoted to lieutenant and then lieutenant colonel fairly quickly, and in July of 1793 he was promoted to général de brigade. Seeing action, he was repulsed at Roncq that August but then promoted to général de division and appointed commander of the Army of the Western Pyrenees. However, the representatives of the people on hand instead left General Muller in charge of that army and instead sent Dumas to take reinforcements to the Army of the West.

Dumas was next named commander of the Army of the Alps, and he seized Petit-Saint-Bernard and Mont-Cenis. During this time he openly defied the representatives of the people when he prevented some civilians from being executed for trying to save their church bells from being melted down. Instead of allowing the people to be executed, Dumas had the guillotine burned, giving an excuse of being cold and in need of firewood.1 In July of 1794, he returned to Paris and then was ordered command to the Army of the West in August. Two months later he briefly commanded the Army of the Coasts of Brest before joining the Army of the Sambre and Meuse.

At the end of 1795, General Dumas tried to resign his command at Sedan but the Minister of War refused his resignation. Instead, Dumas was sent to command at Landau. October of 1796 gave General Dumas a new opportunity to shine for he was transferred to the Army of Italy where he took command of a division of cavalry. He served at Mantua and La Favorite and then had an altercation with the chief of staff General Berthier. Afterwards, he was placed under Joubert's command as the French moved into the Tyrol. Dumas fought at Neumarck that March, and then the next day he single-handedly fought off an Austrian cavalry squadron on the bridge of Brixen. He suffered two sabre blows during this encounter, but afterwards was known as the Horatio Cocles of the Tyrol. Regardless of his wounds, Dumas continued to lead the cavalry in the Tyrol, and fought at Mittelwalde a few days later.

In 1798 Dumas was designated for the Army of the Orient and embarked for Egypt with the army. Commanding the entirety of the cavalry, he seized Menzaleh in October and then helped to repress the revolt in Cairo. But all was not well in Egypt, and Dumas requested to return to France. His request granted, Dumas embarked for home on March 7th, 1799. Unfortunately, the ship he booked passage on had to stop at Tarente for repairs at the end of March, and Dumas and the other French were immediately seized as prisoners. Held as a prisoner for two years, he was finally released in April of 1801 with his health greatly deteriorated, possibly due to poisoning. He retired the following year.