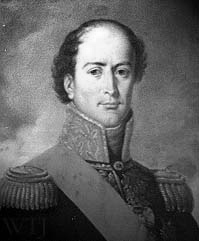 Cause of Death: Fatigues of war

Jean-Baptiste Eblé was born with artillery in his blood, for his father was an artillery sergeant before becoming an officer during the Revolution. Eblé followed in his father's footsteps, joining the artillery in late 1773. By the time of the Revolution, he had risen to lieutenant, and in May of 1792 he was promoted to capitaine. Captain Eblé served in the 9th Company of Horse Artillery which was attached to the 7th Artillery Regiment, and over the next few years he would serve in the Army of the Ardennes and Army of the North.

1793 was a big year for Eblé as he was promoted to chef de bataillon in August, then in September he took part in the Battle of Hondschoote . Three weeks later he received a promotion to général de brigade, and not long after that he was designated director of the artillery park of the Army of the North. After fighting at Wattignies , Eblé was promoted to général de division and made commander-in-chief of the artillery of the Army of the North. Within two months he had gone from being a captain in a regiment to a général de division commanding all the artillery of an army. Over the next year he took part in the sieges of Ypres, Nieuport, Bois-le-Duc, Crèvecoeur, and Nimègue before becoming inspector general of artillery in late 1794.

During the years of peace, Eblé served on the council of artillery and commanded artillery troops in various allied locations outside France. He was rewarded for his service as a Grand Officer of the Legion of Honor in June of 1804, and then in August of 1805 he took command of the artillery of Bernadotte's I Corps. After campaigning with the army, Eblé was tasked with arming Mainz and other fortresses on the frontier of the Rhine in 1806. Returning to I Corps for the Prussian campaign, he served at Halle and Lubeck before being made governor of Magdeburg.

With the foundation of the Kingdom of Westphalia, Eblé was appointed Minister of War for the new kingdom, a position he would hold from 1808 to 1810. In the meantime he was made a Baron of the Empire and Grand Commander of the Order of Westphalia. In March of 1810 Eblé returned to France and was then sent south to take command of the artillery of the Army of Portugal. In this position he served during the sieges of Ciudad Rodrigo and Almeida.

After returning to Paris in 1811, the paperwork was submitted in early 1812 for Eblé to become a Count of the Empire. For the upcoming Russian campaign, he was placed in charge of the bridging train of La Grande Armée. He took part in the combat at Smolensk , and during the retreat he became a critical factor in the army's survival as his incredible foresight and exertions helped save the army at the Berezina River. Napoleon had ordered Eblé to abandon his bridging equipment, thinking it would be not needed. Eblé disagreed but the Emperor was adamant, so he quietly ignored the orders and ordered his men to save as much of the equipment as they could.2 As General Dombrowski lost control of the vital bridge over the river, and General Corbineau discovered a ford over the river, Eblé's fortuitous disregard of orders gave the army a chance to make use of the ford.

Plunging into the freezing water, Eblé led his pontonniers by personal example and they tirelessly worked on constructing bridges night and day. Three bridges were built, enabling the remnants of the army to continue the retreat. Unfortunately many of the camp followers were exhausted from the retreat and so did not take the available opportunities to cross the bridges. Eblé attempted to convince as many as possible to cross, but eventually was forced to set fire to the bridges he had worked so hard to build so the Russians could not easily pursue the army.3

For his work at the Berezina, Napoleon named Eblé commander-in-chief of the artillery of the whole army, and gave Eblé the honor of wearing golden spurs, which became a tradition for pontonnier officers of the French army.4 Eblé's exertions and exposure at the Berezina were too much though, and he fell ill and died at the end of the year. The Emperor, unaware of Eblé's death, appointed him inspector general of artillery in January to further reward him. After Napoleon learned of his death, he ensured Eblé's wife was made a countess as a tribute to the officer whom he could no longer reward.