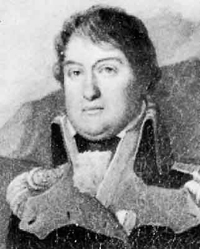 Polish général de division who served France from 1796 to 1814

General Dombrowski was a well known Polish officer who began his career in the Saxon military. After serving in the guard of the Elector of Saxony, in 1791 he entered the Polish military and the next year was serving as a major. Troubles followed though as in 1793 he was denounced by his enemies who claimed he was promoting intrigues with the pro-Russian party. Arrested by the government, he was taken to Warsaw but absolved of the charges and returned to active duty. The next year he was promoted to lieutenant general, and fought against the Prussians at Labiszin and Rydgocszy. In 1795 he was taken prisoner by General Suvarov but was well treated and eventually he recovered his freedom.

Once free, Dombrowski traveled to Cologne and in November of 1796 he was authorized by the French to serve as a volunteer in their staff of the Army of the Sambre-et-Meuse. After also raising a Polish legion to serve France, he traveled to Italy where he took command of the 1st and 2nd Polish legions of the Army of Italy. After serving in Delmas' and Baraguey d'Hilliers divisions, he took command of the auxiliary troops of the Cisalpine Republic in late 1798.

In early 1799 Dombrowski took command of the Polish legion in the Army of Naples with which he occupied Pontremoli, Massa, and Carrare. At the Battle of the Trebbia in June of that year he was wounded, and two months later he served in the right wing of the Army of Italy under Gouvion St. Cyr and distinguished himself at Novi . Finishing the year out with more fighting, he went on to fight at Bosco and Novi again. Awarded the rank of général de division in the French army in February of 1800, he commanded the Polish troops in Italy for the next few years. In February of 1802 Dombrowski officially entered the service of the Cisalpine Republic.

With war breaking out in 1805, Dombrowski commanded the camp of Montechiaro until December of that year when he took command of a division and fell under the overall command of Eugene de Beauharnais. After participating in the blockade of Venice, he took command of a division in the Army of Naples. In August of 1806 he was named commander of the province of Pescara, but the next month he rejoined the Grande Armée. Raising another Polish legion, this time at Posen, he led it into action in February of 1807 at Dirschau where he was wounded but victorious. In May he led his men at the Siege of Danzig as part of Marshal Mortier's VIII Corps, and then took part in the Battle of Friedland.

With the creation of the Grand Duchy of Warsaw after the Treaty of Tilsit, General Dombrowski entered the service of the newly created duchy. During a formal ceremony where the officers were being presented to the King and Queen of Saxony, Dombrowski participated by introducing each of the Polish officers to the king and queen. As he stepped forward and back, saluting and introducing each of his officers, one of his spurs caught the queen's dress and he fell, ripping her dress in the process. All present attempted to continue standing at attention until the king burst out laughing, then the queen, then everyone else, and finally Dombrowski too.1

In 1809 Dombrowski took command of a division in the Polish corps under General Poniatowski, taking part in the campaign of that year. In the years leading up to the invasion of Russia, he commanded the 2nd military division. Preparing for the invasion of Russia, he commanded the 17th Division in Poniatowski's V Corps and during the campaign was charged with blocking Bobruisk and covering the right flank of the army to Minsk and Mohilew. During the retreat, Dombrowski successfully captured a bridge over the Berezina River at Borisov. Unfortunately, despite his gallant attempts to hold the bridge against Russian attacks, he was so badly outnumbered that he was forced to give it up, enabling the Russians to destroy the bridge.2 This was a disaster for the French army, now unable to cross the river and escape the pursuing Russians, but the disaster was negated by General Corbineau's timely discovery of a ford over the river. Dombrowski then took part in the Battle of the Berezina where he was wounded.

March of 1813 saw Dombrowski commanding a Polish division and ordered to defend Wittenberg. Throughout the fighting of 1813, he commanded a Polish division under different commanders and also fought at Magdebourg. Fighting at Leipzig in October, he took command of VIII Corps after Marshal Poniatowski's unfortunate death. Charged with the defense of Compiègne in February of 1814, after Napoleon's abdication he returned to Poland where Tsar Alexander placed him in administrative positions. Over the course of his career he received many awards, including being a Commander of the Legion of Honor, the Grand Cord of the White Eagle of Poland, Commander of the Order of the Iron Crown, and a Knight of the Orders of Saint Wladimir and Saint Anne of Russia.